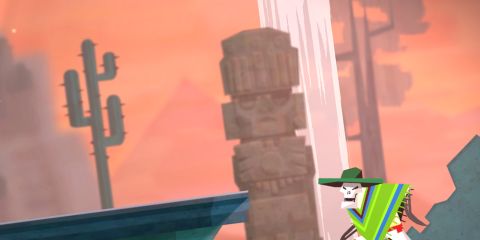 Drenched in Mexican culture and mashing together a half-dozen classic games, Guacamelee! is a challenging and delightful experience. It draws heavily on a triumvirate of combat, platforming, and exploration to create a memorable romp through a multi-dimensional world, consistently offering up vexing problems that take skill and creativity to solve. Emboldened by a confident art style and sense of humor, its only drawback is that it may be too much to handle for casual gamers even as it strikes an oft-ignored chord for hardcore fans.

Best known for its superb Mutant Blobs Attack! from last year, Toronto’s Drinkbox Studios has gone bigger and better with Guacamelee!. Playing as a Luchador (wrestler) tasked with saving the World of the Living from an evil leader of the World of the Dead, you'll navigate a rich and colorful environment inhabited with interesting enemies in both dimensions. Over time, you'll acquire various powers and skills in order to steel yourself for tougher battles and seemingly impossible platforming tasks, all to prepare for the final fight.

The combat is definitely satisfying. A deep feature set offers multitudes of options, from ground and air-based combos to special moves designed to match particularly equipped enemies. While some enemies can easily be dispatched with mindless button-mashing, others require thought, planning, and a quick set of distinct combinations to eliminate. Some fights get frustrating, especially as multiple enemy types descend upon you in enclosed spaces, but (mostly) fair checkpoints make these battles much easier to take and eventually triumph over.

Getting around is easy at first, but as the game progresses, the challenges get intense. Thanks to the two dimensions of the worlds, there are areas that can only be seen and touched in one or the other. This, in turn, requires very quick hands in order to execute perfectly timed double-jumps tied to special moves while changing dimensions all at the same time. As you advance to the late stages of Guacamelee!, there are a few that feel almost impossible; but after finding the exact combination of special abilities needed to progress, the sense of reward is empowering.

Therein lies the biggest--and, really, only--issue with Guacamelee!. There are several intense difficulty spikes that turn a delightful experience into a temporarily frustrating one, especially in certain platforming spots. While there are dozens of tough combat battles, those almost always feel fair; it’s simply a matter of figuring out the specific way to defeat enemies in the best order and then move on. While difficulty balance is always a tough thing to nail, Guacamelee! could have used a few simple hints to let players know how to approach certain situations without letting them flail around for 15 minutes in vain.

Sometimes, the best thing to do is simply put the game down and cool off for a few minutes. Luckily, Guacamelee! offers cross-buy and cross-save between the PS3 and Vita, so when you’re standing in the shower thinking about a particularly vexing spot and have a “eureka” moment, you can simply grab the Vita to test out your theory. Guacamelee! looks, sounds, and controls beautifully on both systems, so picking which one to play at any moment is more about convenience than anything else. You can’t go wrong with either.

When you put together a little Metroid, Castlevania, Super Mario, and Mutant Blobs Attack! then immerse it in Mexican folklore, you get Guacamelee! A meaty experience with terrific combat, lovely visuals, and a smart sense of humor, it scratches an itch that’s being ignored more often than not these days. Despite some frustrating moments and difficulty spikes, it’s a terrific game for PlayStation Network gamers looking for something both familiar and different.

This game was reviewed on the PlayStation 3 and PS Vita.