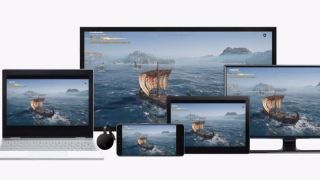 The Pro version of Google Stadia is by no means a "Netflix for games," Google product director Andrey Doronichev said in a recent Reddit AMA. A Pro subscription lets you stream games in 4K/HDR at 60FPS with 5.1 surround surround, and it gives you access to unspecified discounts and a growing library of free games, but it won't give you instant access to a massive library.

"To be clear, Stadia Pro is not 'Netflix for Games' like some people have mentioned, a closer comparison would be like Xbox Live Gold or Playstation Plus," he said. "The Pro subscribers get 4K/HDR streaming, 5.1 sound, exclusive discounts, and access to some free games. Roughly one free game per month give or take. Starting with Destiny 2."

Doronichev also clarified that if you unsubscribe from Pro and fail to claim a free game, but later choose to resubscribe, "you will regain access to those Pro games you claimed in the past while you were a subscriber. But not the ones that were offered to Pro subscribers while you were unsubscribed." This puts Google Stadia Pro on-par with PlayStation Plus and similar console store subscriptions, but it also raises some questions about some games, namely Destiny 2. It sounds like anyone who doesn't start a Pro subscription at launch and claim Destiny 2 within Stadia's first month will have to pay full price for it, and even with Destiny 2 cross save on the way, the lack of cross-platform multiplayer will hurt Stadia's Guardian population. This could lead to an incredibly small player base, which would be problematic in a game with so many multiplayer queues.

He also added that there are "no free games on Stadia Base. But hey, Stadia Base gives you free access to the state-of-the-art gaming hardware in our datacenter. You spend your money to buy games you want." Some people - not unreasonably - interpreted this to mean that free-to-play games like Fortnite and Warframe will only be available to Pro subscribers, but it's possible Doronichev was referring to the games in the free Pro library. Still, this point could use some clarification, so we've reached out to Google on the status of free-to-play Stadia games.

Elsewhere in the AMA, Doronichev touched on the social features that Stadia will support. "At launch you’ll be able to manage your friends list, create parties and use platform-level voice chat," he said. "And that’s just the beginning. We also have a healthy pipeline of social features going forward." Stadia equivalents to trophies and achievements, for instance, will be added in the future ("a little bit later," as Doronichev put it), but won't be available at launch.

If you're wondering, no, there won't be a Google Stadia beta before launch.