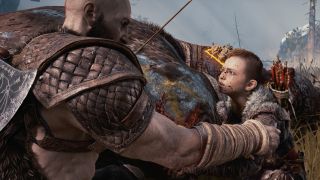 God of War was one of the best games of 2018, as you may have deduced from our gushing God of War review and the fact that it won approximately 10,000 awards last year, and that's largely because of its story. A more human, vulnerable Kratos and his endearing son Atreus managed to tell an enchanting father-son tale in a series best known for M-rated action. But as game director Cory Barlog explained at the recent Gamelab conference in Barcelona (as Eurogamer reported), Kratos was almost cut from the game entirely, and later on, so was Atreus.

"Early in discussion, people were saying we had to get rid of Kratos," Barlog said. "It was like, 'he's annoying, he's done'." Kratos began life as an anti-hero at a time when anti-heroes in games were scarce." Using an all-new protagonist was a popular suggestion at the time, with the most common argument being that "Kratos is not God of War, Greek mythology is God of War."

"They really did not like the character," Barlog continued. "They wanted a new character. It took a lot of convincing to make them think it was a good idea." Barlog argued that Kratos' tragic and largely untapped past - that is, forever being branded with the ashes of his late wife and daughter, whose deaths can be traced to his violent past - could serve as a platform for a stirring redemption story. This narrative led to Atreus, someone else for Kratos to treasure and protect and teach - and be taught by. But Atreus, too, was unpopular at first and nearly cut.

The "old guard" at Sony Santa Monica was concerned that Atreus would turn the game into an overlong escort mission, Barlog explained. He pointed to The Last of Us as proof that partner characters don't have to be burdens, and said that ultimately "it really needed to boil down to a few simple rules to prevent the player's experience from sucking." As we now know, the final player experience did not suck, and both Kratos and Atreus are to thank.