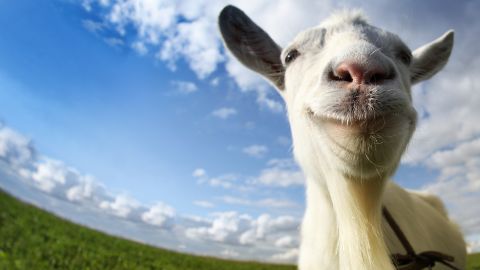 'Ready! Steady! Goat!' Seriously, Coffee Stain Studios? That's the best you could do? It didn't behoove you to ram your game full of goat puns and wordplay? You didn't milk that opportunity, grab it by the horns? How are we supposed to have a good time when you're showing such a gruff attitude? Sadly, we're not. We're playing Goat Simulator, a place where good times fear to tread.

Playing as an invulnerable goat, you explore small towns, causing destruction and wishing there was more to do. It might be the smallest sandbox on next-gen. There is some fun to be had from throwing your goat on trampolines and trying out the tiny amount of tricks (backflips, front flips, uh, that's pretty much it).

But the novelty wears off quickly. Exploring and making havoc simply isn't enjoyable when controls are as rigid and unresponsive as this. Interacting with most of the world consists of just running into things until they fall over or explode. It gets old fast, and isn't helped by how disturbing it is to play.

See, you're not playing a standard run-of-the-farm goat here. Your beast has powers, performing feats we never thought we'd see a goat pull off. We never wanted to see a goat pull them off either, and now we have, we don't think we can ever look at a goat the same way again. You can shoot your freakishly long tongue onto objects, sometimes letting you fling them around the map to cause more destruction.

Even when it works, which it often doesn't, it's not exactly fun or pleasant to watch. Fighting unlocks a goat with less fur, leaving red, fleshy patches for you to enjoy – a bit like Batman's gradually degrading clothes in Arkham City, except disgusting. You can even make the goat collapse at the touch of a button, so we can enjoy the Unreal Engines ragdoll physics with a goat corpse. Uh, yay? We found the goat abuse more uncomfortable to play than amusing. Even if you find it hysterical, do you really want to blow eight pounds on a one-joke game?

Because you're not getting a lot of bang for your buck (or goat for your groat). You'll have seen almost everything in its first hour, with little reason to stick around and endure more. There's a high score being tracked, but it resets if you try any event. What's the point of trying for a high score in the first place then? The events themselves are rubbish too, if you can actually find one. Time trials give you sixty seconds to accrue as many points as possible, tells you your score and then that's it.

There are online leaderboards, but you have to quit to the main menu to check them. Racing is even worse, with no computer rivals to compete with and poorly laid out checkpoints. Often you'll find yourself endlessly wandering the map, with no hint from the game as to where the next race marker is. This could've been fixed for Xbox, but that would've involved the developers having to actually put some effort in.

But porters Double Eleven Limited sound almost proud of that laziness, proudly stating on the game's synopsis that 'we're only eliminating the crash-bugs, everything else is hilarious'. It isn't. If you want hilarious, play Saints Row IV. If you want to waste your money on a broken game that barely inspired a smile from us, buy Goat Simulator. Presumably, if Coffee Stain Studios tried making Hilarity Simulator it'd be set in a morgue.