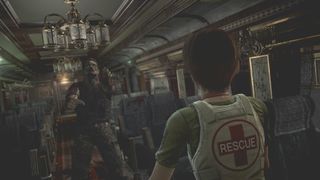 From commuter transport to mobile facilities and lairs, there's been plenty of times where PlayStation gaming has taken to the rails for action on the move. Make sure you've paid your fare, then hop aboard as we ride the greatest choo choos on Sony's consoles.

Here’s a spot of travel advice: never, ever take a train through the Arklay Mountains. If you do, you may find yourself on the Ecliptic Express... or The Spookiest Damn Locomotive That Ever Was, as it really should be known. Zero’s runaway rail carries paranormal leeches, armies of the undead and a five-tonne scorpion. Next time, take the bus.

After landing on the planet Kerwan, our lovable twosome must get personal with the legions of Blarg who’ve hijacked Aleero City’s floating trainline. Seeing as the aliens have clearly dodged their fares, it’s only fair Ratchet murders every last one of them.

Thomas and the Fat Controller should probably close their eyes sharpish, because FFVII’s train graveyard is a mighty upsetting sight for all rail lovers. Midgar’s labyrinth of broken down carriages and twisted tracks fell into disrepair due to the negligence of Shinra Electric Power Company. Naughty, naughty Shinra.

Or Railfan: Chicago Transit Authority Brown Line, as we cool kids like to call it. Watch Dogs may let you hack the Windy City’s famous “L” train network, but does it painstakingly recreate the CTA’s route from Merchandise Mart (yes, that’s an actual station) to Sedgwick? Thought not. Japan’s PS3 Train Simulator offshoot is hardcore, baby.

Running for a train sucks. Y’know what’s even worse? Keeping up with one on a rickety motorcycle as gangbangers fire at you from a carriage. Wrong Side Of The Tracks is one of the most infuriating missions in GTA history, mainly because your AI buddy’s aim blows. Screw you, Big Smoke.

It wouldn’t be a Western without a train robbery. Sure, you don’t need to make John Marston fleece the locomotives that chug through New Austin, but it sure is fun. It’s worth a chunk of change, too. Just promise us you won’t tie any poor damsels to the tracks...

We’ve heard of christening boats with women’s names, but calling a train Bertha? That takes the Cockney cake. Syndicate’s train hideout handily ferries Jacob and Evie around Victorian London, taking in all manner of old timey sights. As a bonus, it’s owned by an incredibly named Scottish lady: Agnes Macbean.

Trust COD to throw up the worst train ride since Unbreakable. Bruce Willis may have found out he was invincible on that fateful journey, but even his impervious arse couldn’t survive Ghost’s finale, which takes place on a futuristic choo choo rammed with terrorists. Worse, choppers keep pelting the carriages.