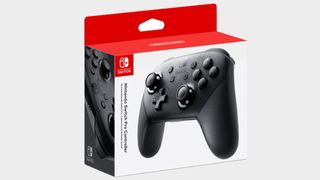 Want a cheap Nintendo Switch Pro Controller deal before Christmas? Oh, go on then. Because it's the holiday season, Walmart has slashed the price of Nintendo's more traditional (and bloomin' excellent) handset down to $55, which, from what we can tell, is the cheapest it's ever been. That's a big deal thanks to Nintendo's aversion to discounts. It normally retails for $69, so this is a saving of $14 overall - good value for money, then. If you'd prefer to pick it up elsewhere, Amazon is also selling the controller for $55.

This cheap Nintendo Switch Pro Controller deal is a good start to the sales we're sure to see over the festive period. It's the perfect gift for yourself or a Switch-playing loved one, too. Thanks to its more classic styling similar to the Xbox One and Gamecube handsets, rubber grips, traditional d-pad, HD rumble, and arguably superior thumbsticks, the Pro Controller is a good alternative to the standard Joy-Cons you get with the console itself - particularly if you play games like Super Smash Bros. Ultimate and Skyrim. What's more, the build-quality is great and it has Amiibo functionality. Cool (there's a reason it's considered one of the best Nintendo Switch accessories out there).

Nintendo Switch Pro Controller | $55 at Walmart (save $14)
That's the lowest price we've ever seen for this must-have Nintendo Switch accessory, so don't miss this offer - we're unlikely to see it cheaper until the January sales.View Deal

If you'd prefer another kind of Switch handset, don't miss our guide to getting hold of a Nintendo Switch controller cheap. It's full of bargains on Joy-Cons and beyond. For everything else deals-related, just keep an eye on GamesRadar+ - we'll be bringing you the best bargains, reductions, and price cuts over the holiday season to save you time as well as money.