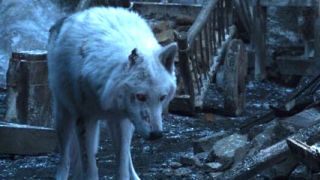 The latest episode of Game of Thrones season 8 was the come-down we needed after that massive (and dark) Battle of Winterfell, but there was one glaring problem: Jon Snow doesn't so much as pat his loyal dire wolf Ghost before leaving him with Tormund and pissing off down south. Does Ghost smell bad after running around with all those legions of the dead? Does Jon just not have a heart? The director of the episode, David Nutter, gave a practical explanation for the seeming snub in an interview with Huffington Post.

"Since the direwolves are kind of CG creations, we felt it best to keep it as simple as possible," said Nutter. "And I think that it played out much more powerfully that way."

You probably already realized this, but Game of Thrones' adult dire wolves aren't actually that big. Real-life actor pups are filmed and then scaled up with digital effects to lend them their impressive size. It would have been a gamble in terms of production and emotional payoff to do all the work for a brief physical interaction between Jon and Ghost.

I think it would've been perfectly pleasing to fans if we just saw Jon lean over and pet something big and furry that was mostly obscured by his cloak, but maybe that would've felt cheaper than the quiet moment they shared. "Keeping Ghost off to the side, I thought that played out better," Nutter said.

As for why he even needed to part ways with his loyal mega-hound, Tormund's actor Kristofer Hivju put it nicely.

"I think Jon is right that the south isn't the place for a direwolf," Hivju said. "In Episode 2 or 3 they killed one of them [Lady, Sansa's direwolf] - it's a wild animal, it's like a wolf plus two! I think it's best for Ghost to go north." There's a metaphor somewhere in there about the danger and nobility of the northern lands and their peoples being destroyed by the intrigue and betrayal of the south.

Read about how they staged that crucial feast scene from episode 4. Or watch our recap video of the whole episode to make sure there weren't any details you missed.