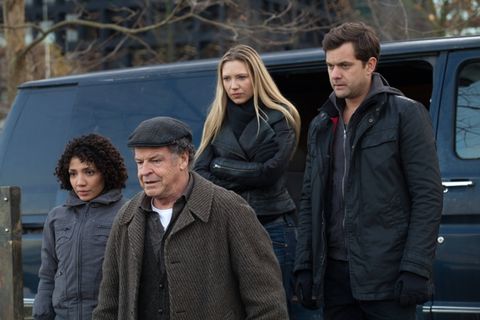 THE ONES WHERE Olivia uses Cortexiphan to travel "Over There" to allow her to sneak into the laboratory where the Observers are holding Michael. Once the boy is rescued, the Fringe team and September put their long-gestating "Plan" in motion to stop the Observers ever being created.

VERDICT So that's your lot. After five seasons of X-Files -type shenanigans, hopping across universes, meddling with timelines, defying the laws of physics and fighting invaders from the future, Fringe comes to an end. Unlike most US network shows it gets to go out on its own terms, delivering an ending that – while not particularly surprising – is at least emotionally satisfying. The two episodes of the finale (reviewed as one entity here because that's how you'll have watched it) won't feature in many lists of Fringe 's best ever stories, they do the important job of tying up loose ends without damaging the legacy of what came before. That Fringe didn't "do a Lost" should be enough to keep the faithful happy – and there's plenty here to like.

In fact, the finale makes sure that any Fringe fan's wishlist will be more or less ticked off. There's a final trip to the other universe, the return of Gene the cow and plenty of Fringe tech from previous seasons. The two episodes also make time to provide closure and say goodbye to all of the major characters: there are beautiful scenes between Walter and Peter, Walter and Astrid, and Olivia and Peter, while we learn what happened to Lincoln (Seth Gabel returns for a guest appearance), Fauxlivia and (off camera) Walternate. On an emotional and character level, Fringe 's finale delivers completely.

But it's almost as if the writing team were so preoccupied with giving the characters the send-off they deserve that they took their eye off the storytelling ball – as a piece of drama the two-parter is disappointing. It's oddly paced, for starters, quite pedestrian for much of the running time, before rushing through the "Plan" (the moment that the entire season's been building up to) in a matter of minutes. It's also surprisingly predictable. Okay, it had been obvious for a long time that the season was going to finish with the timeline reset, with those often-used shots of three-year-old Etta playing in Central Park, but the journey there throws up few shocks aside from Olivia using her telekinetics to flatten Windmark with a car. Too often the writing falls back on TV writing 101. Indeed, as soon as September announces that he'll be the one taking Michael to the future, it's practically written in stone that he's going to die and leave Walter to sacrifice himself as originally planned. If you've watched any TV over the last 50 years it's all too inevitable – and diminishes the emotional impact of September's death. (Though, of course, you could argue that's a moot point seeing as the "Plan" succeeding means he never existed anyway.)

And even if you're prepared to accept that the whole fifth season is built around a great, big flashing reset button – luckily, as reset buttons go, this is way more satisfying than the ones pressed in Superman: The Movie and "Last Of The Time Lords" – there are some really lazy storytelling fudges here. Time travel plotlines rarely stand up to forensic scrutiny, but the logic is usually a bit more solid than what's wheeled out here.

But hey, as an ending to five years of TV it does the job. Fringe will go down as one of the all-time classics; a show that – after a patchy first season – became one of the most consistently brilliant and inventive shows on TV, with one of the finest ensemble casts on TV. The Walter/Peter/Olivia axis made for one of the strongest leading trios since Kirk, Spock and Bones first boldly went. We came to love them as they grew, which makes it all the more satisfying that – after all they've been through – Peter and Olivia get a happy ending. Indeed, even Walter gets a happy ending of sorts; sure, he'll never see his family again, but after living with unsurmountable guilt and grief for decades, he has at least found absolution for his meddling with the laws of physics. We'll miss them, but SFX 's world is all the better for having met them.

OBSERVING THE OBSERVER It's cool to see that December, another one of the original 12 Observers sent back to study our present, is still living in New York. Windmark clearly didn't think he had the right stuff to be part of his dictatorship.

DID YOU SPOT 2 A bloody handprint on the wall during Olivia and Peter's assault on Observer HQ has six fingers – rather like the Fringe hand glyph ...

ETTA LIVES ON A "Resist" poster makes its final appearance on the side of a storage crate at the show's endgame. (Though thanks to the timeline reset, Etta returns in person – albeit as a three-year-old.)

WHAT'S IN A NAME? In "Liberty", Walter calls Astrid what sounds like Ashkant. Luckily, by the time the finale rolls around and the pair share a genuinely touching farewell he's remembered to call her Astrid. He even tells her it's "a beautiful name". It's one of the most moving scenes of the episode, not least because it's shared with another old friend...

FOR ALL THE COWS We'd been wondering what happened to Gene the cow – turns out she'd been buried in the amber in Walter's lab all this time, left there because Astrid was worried about her mooing attracting the Observers' attention. It's good to know she's okay – in a timeline that no longer exists.

TRIVIA "An Enemy Of Fate" is Fringe 's 100th episode – a nice round number for the show to go out on.

Click over to the next page for more of our epic Fringe finale review.

ANTI-AGEING MIRACLE If you want to stay looking young, living in the alternate universe is clearly the way to go. Fauxlivia and Lincoln have barely aged a day, despite 20-odd years having passed since we last saw them.

NITPICK 1 It makes no sense that Walter and Michael should simply disappear from the timeline when the Observers were meant to invade in 2015 – it's not as if the show has worried about paradoxes too much in the past. Besides, how does it work? Sorry Fringe , that's an unashamed contrivance of the fudgiest order, and we're a bit disappointed.

NITPICK 2 The "Plan" was an intricately-crafted scheme, requiring very specific equipment to work – or so we thought. So why is it that, when a key component fails, it's dead easy for the Fringe team to just hijack one of the Observers' interdimensional highways? A little too convenient, we think.

NITPICK 3 Windmark's clearly got the advantage over Olivia and Peter when he fights them in the finale's endgame, so why doesn't he just kill them straight off the bat? Has the guy never seen a Bond movie? He must have regretted his decision to dilly-dally later...

TAKE YOUR WINDMARKS We'd been hoping the Observers' ultra-baddie Windmark would get his comeuppance, but we thought it would be the result of a bullet or something similarly mundane. Never in our wildest dreams did we think it would be as cool as this...

GREATEST HITS Peter and Olivia's assault on Observer HQ is a real gift for fans, with the bad guys being hit by loads of gory cameos from Fringe past. The sealed mouths (making their second appearance of the season) made their debut in "Ability" (1.14), the exploding heads first appeared in "The Cure" (1.06), the hallucinations of killer butterflies were initially sighted in "The Dreamscape" (1.09), the melting faces go all the way back to the pilot (1.01), and the parasitic headbursting worms debuted in "Snakehead" (2.09). Meanwhile, the window to the parallel universe is a relic from "Peter" (2.16), and the recording of sound from windows (previously used in "Anomaly XB-6783746" this season) first appeared in "The Road Not Taken" (1.19). (Recovering sounds from glass is still ridiculous, though.)

EXPLAINED Now we know why September, August and Windmark started displaying emotions – it was living among humans what did it. Presumably the effect is similar to the way people can pick up a new accent when they move to another part of the country. (We also know that Walternate is still lecturing university students well into his 90s, which is nice to know.)

UNEXPLAINED There's still quite a lot we're not in the Fringe verse sure about. Just for starters...

SPECULATION Does the fact that only Peter and Olivia have any recollection of the events of seasons 1-3 – and that the events of season 5 have now been prevented from happening – mean that season 4 is the only year of the show that still exists in Fringe canon?

BEST LINE 1
Walter: "Can you hear me? Blasted thing. What I wouldn't give for a good old fashioned tumour-inducing cellphone."

BEST LINE 2
Walter: "Peter, hold on to these tight. Anti-gravity osmium bullets. Shoot observers with these and watch them float away like balloons."
Peter: "If we shoot them they're dead. Why would we want them to float away?"
Walter: "Because it's cool."
Peter: "That makes sense Walter."

FAREWELL FRINGE. IT'S BEEN A PLEASURE. SFX WILL MISS YOU!