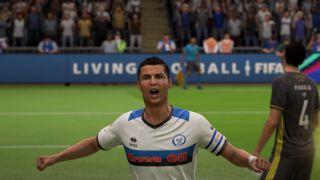 Heard the one about FIFA 19 containing dynamic difficulty? It’s a claim the game’s community has levelled at the game, and series, for close to two years. Today developer EA Canada finally addressed it a direct statement on the official EA forums.

“We’ve heard your concerns around the Dynamic Difficulty Adjustment patent family, and wanted to confirm it’s not used in FIFA,” wrote community manager Andrew Mears. “We would never use it to advantage or disadvantage any group of players against another in any of our games. The technology was designed to explore how we might help players that are having difficulty in a certain area of a game have an opportunity to advance.”

The ‘Dynamic Difficulty Adjustment’ patent being referred to concerns a paper written by EA two years ago, which has - quite understandably - undergone microscopic analysis across the FIFA community ever since. You can view it in PDF form here.

The most intriguing paragraph contained within pertaining to EA’s footballing behemoth is the one below, as originally extracted for further inspection by walrus_fifa on Reddit:

It’s easy to see why many FIFA fans read so much into those words. Hell, I’ve done the same at times, given the ridiculous in-game behaviours exhibited on occasions in Squad Battles. Jamie Vardy’s shooting accuracy when I need an equaliser in the 89th minute? Often non-existent. EA directly addressing this in a statement is a start, at least. One which has been followed up on by global community franchise lead Corey Andress on Twitter.

“For those that will ask why it took us a while to respond: We wanted to be 100% sure that this patent didn’t exist in the game. This includes all aspects - every mode and gameplay,” wrote Andress on Twitter. “Hopefully this ends speculation, and [we] appreciate the patience while we got the answer.”

“Important to note that this was an EA patent and it wasn’t specific to FIFA,” he added in a later response. “This might help other titles (I don’t know the use in other places), but it wouldn’t make sense for us.”

FIFA 19 is out now on PS4, Xbox One, Nintendo Switch and PC. Already looking ahead to its successor? Then check out our piece on FIFA 20 confirmed features, including the spiritual return of FIFA Street in Volta mode.