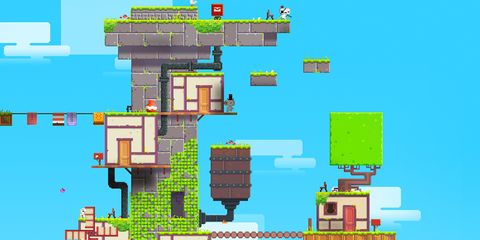 What if we turned our head to the left and looked at the blocks from this angle? What if we jumped every time there was a slanted line, and held the left trigger whenever there was a square? What if the secret to opening this door involves standing still for twenty minutes? Is this a glitch, or are we supposed to be able to fall out of the window? Is that a QR code on the wall? Should we talk to more owls? Yes, all of these are perfectly valid questions you'll be asking as you experience Polytron's Fez.

Fez is more about cryptography than it is platforming. Sure, there’s plenty of jumping around from object to object and climbing things, but that’s only surface-level stuff. It’s deeper – much deeper – than initially anticipated, proving to be an absolutely magical, albeit maddening experience.

It starts off as we expected, giving us control of Gomez, a 2D sprite living in a 2D world with 2D people and 2D things. Everything is flat, sprite-based and adorable, until Gomez is gifted the titular Fez that bumps everything into the third-dimension. This magical, mysterious hat lets the shoulder buttons break free of the second dimension, allowing Gomez to shift the four-sided world over. A giant block also happens to explode once he gets his fez (a tragic coincidence), and for the remainder of the game he needs to travel the world collecting small cubes that can be used to make larger blocks. Collecting blocks opens doors, which lead to other rooms with more doors and blocks and treasure maps and anti-cubes and artifacts.

His ability – to shift the world around on an axis – has plenty of practical uses. Gomez can rearrange the dimensions to line up objects that otherwise wouldn’t connect and reach platforms in previously inaccessible places. It becomes more complicated than that as the game goes on, adding in other interesting elements that play with the unique formula. If you’re signing up for Fez specifically to jump on things, you’re not going to be disappointed; it does that well. When it puts on its platformer hat, Fez has some of the smartest design we’ve seen in years, with mind-bending segments that require precision timing as well as a mastery of the game’s unique world-shifting mechanics.

But eventually, we ran out of places to go and doors to open, and were drastically short of the number of cubes we needed. We opened the map (which became more vital as the web of interconnecting doors became more wild) to see dozens of rooms we didn’t (or couldn’t) get to – some with question marks hovering above them, hinting that there are secrets to be found. This’ll happen after a few hours of play, causing the game to suddenly transform from cute, indie platformer to absurd, puzzle-cracking masterpiece.

Those doors and cubes we mentioned earlier? They’re important. Very important. A major part of Fez is finding out how to open doors that lead to different areas that include more cubes. These doors oftentimes have very specific button presses needed to open them. Usually, you’ll need to hit the right combination of buttons, as prompted by a nearby object, in order to pass through; then, and only then, will the door open.

Sounds simple, right? Well, there’s a problem: although the code needed to open the door or access a cube is usually written in the room, it’s often hard to find – covered by an object, or hidden in a picture. What’s more, the codes aren’t written in English. Or Spanish. Or any actual recognizable language at all. They can be blocks, or squiggly lines, or shapes representing numbers.