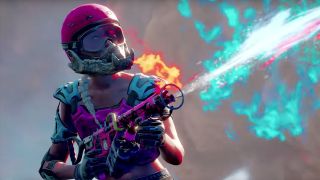 Far Cry 5 had an ending that divided people quite a lot (setting off nuclear bombs with minimal signposting will do that), but the Far Cry New Dawn ending isn’t nearly as controversial. Nonetheless, if you’re reading this you’re probably wondering what it means for the future of the series, and don’t worry: I have answers. We’ve completed the Far Cry New Dawn ending in two majorly different ways, so below you’ll find what changes depending on the path you follow and what it might mean for Hope County and the future of Far Cry’s American nightmare.

SPOILER WARNING: Below you are going to find out what happens at the end of Far Cry New Dawn, so if you haven’t completed it don’t read any further!

Hello, you’re still here! So, at the end you have two decisions to make: you can choose to kill or spare both Mickey and Joseph Seed. In the former’s case, while she’s lying all bloody and beaten up next to her dead sister (there’s no option to save Lou and her violent temper), Mickey promises that if you spare her life you’ll never see her again. She sounds fairly honest and appears to have had some kind of major epiphany after realising that you’re a lot like her mum, always wanting to make things better...but, considering all the people that have died because of her, I honestly don’t blame you for nestling a bullet deep inside her skull.

You get the same choice when it comes to Joseph. Your final encounter with him, following the boss fight with his son Ethan after he got corrupted by Eden’s Fire, leads to Joseph setting his pink tree on fire (which seems to symbolise God to him), then confessing that he’s a “monster” who “has only spread suffering and death in the name of God”. Yeah, no duh. Joseph pleads with you to kill him, even planting your gun against his chest while whispering “release me”. You can either pull the trigger, or leave him alive and breathing. Because of all he did to the innocent civilians of Hope County before the bombs fell, I refused to let him have the easy way out, but you know, you do you.

If you kill Mickey and Joseph

If you decide the world is better off without two people who will happily brainwash or straight-up terrorize innocent civilians, not much changes after the credits roll. Well, actually, nothing changes. You can go to both the rock in New Eden where Mickey died and to the burnt tree where Joseph perished, but nothing is waiting for you there: no dead bodies, no notes from vengeful New Eden worshippers or the Highwaymen, nothing. This Far Cry New Dawn ending means that the final final cutscene stays the same too, with Carmina and you sharing a beer by Rush’s grave. So now that you know that, go forth and murder as you see fit, my sweet avenging angels.

If you spare Mickey and Joseph

Now, if you’re the more forgiving type, you might find it in your heart to spare Mickey and Joseph. You’ll still get the same scene with you and Carmina sharing a beer by Rush’s grave. And hey, you’re kind of rewarded for doing so when it comes to Mickey, as if you go back to where you last saw her there’s something extra waiting for you. Upon the rock where she and her twin died, there’s her bone-adorned helmet and a note that reads:

You’ll still have some Highwaymen to deal with. They won’t want to give up the good life they’ve got here, but that’s your problem to solve.

Me, I’m gonna head back east and look for my mom. A long time ago, our dad made us leave her behind. I’m gonna go see if she’s still alive out there.

Mickey is now on the path to redemption. Depending on which Far Cry New Dawn ending Ubisoft decides is canon, this could set up a fascinating sequence of events: what if in the next Far Cry game, you play as Mickey, making your way across America to find your mom? Your adeptness with weaponry would have a pre-made explanation, having learned all about how to handle a gun during your days leading the Highwaymen. Plus depending on how you end that game (having the choice between a ‘good’ or ‘bad’ ending), either decision would make sense: you could go good, in an attempt to redeem yourself and your days of murdering innocents, or you could go bad, confirming that despite however much she tries, Mickey is still the same ruthless person she was when she used to run a gang with her sister.

As for Joseph, I personally think leaving him alive is a greater punishment than killing him. Making him live with what he’s done, the people he’s got killed, his failure: now that is hell. He seems to think so too, as if you don’t shoot him - you can simply wait out the button prompt to do so - he stays on his knees, bellowing “RELEASE ME” into the sky. Return later on, and he’ll simply be gone. No note, no dead body, nothing. It’s up to you whether you think he killed himself, fled into the wilderness, or has hidden away and is currently devising more nefarious plans for the future.