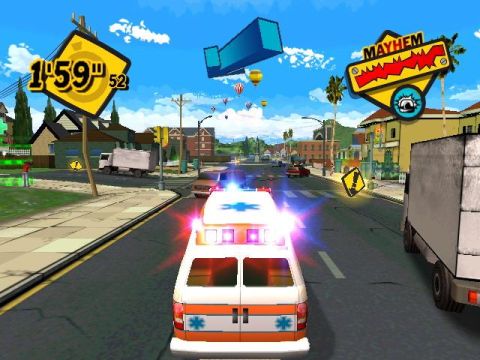 Zany. Crazy. Wacky. Madcap. Troublesome words that set our wrongness klaxons a-whining whenever they’re used to describe something. They’re words you’d associate with the voice-over in trailers for comedies starring teenage ‘nerds’ who are trying to woo the hot cheerleader. And while we’ve not actually seen any of these words associated with Emergency Mayhem, they’re a perfect fit and no mistake. Mental!

The game has been around since 2005, when it was in the hands of the now defunct Acclaim, and it was probably best left buried in the ruins of that company. But Codemasters deigned to pick it up, and here we are. The premise is that you’re in charge of all three emergency services, which are operating in a city that’s gone crazier than Tom Cruise. You’ll start off in one district and unlock more when you’ve reduced a ‘mayhem’ bar to zero within a set time limit. And how do you do this? With difficulty...

First off, you choose which service to play as, then you tear around the district, attending to an emergency when you come across one (and they’re everywhere). The streets are packed with mad-eyed pedestrians, badly-driven cars and a zillion pick-ups, half of which seem to be there only to confuse. Such is the amount of stuff going on in this candy-coloured metropolis, it feels like you’re taking one to the face from a shotgun filled with pick ‘n’ mix.

Once you’re at the scene, play switches to a minigame, the majority of which are controlled with the remote. For example, you’ll be making a pumping action to extinguish an over-heated barbecue, or completing a circuit by dragging wires to get a set of traffic lights working again, while one of the police missions has you chasing down some bad guys.

To be fair, some of the games are decently engaging, but with only 30 on offer and the games cropping up every few seconds or so (literally), they get stale fast. But never fear: you unlock lengthier versions of them for the multiplayer mode. How zany is that?