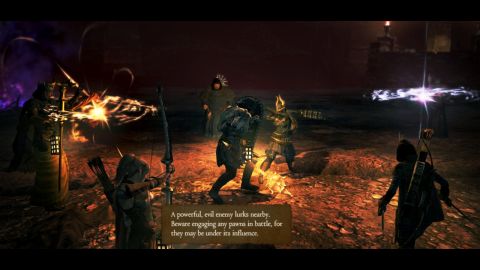 Dragon’s Dogma is like a precociously intelligent teenager, in the sense that it has ideas beyond those of its peers, but struggles to explain itself. There’s no better example than the game’s rushed opening, which drops you into the armored boots of a warrior about to face a giant chimera. Then suddenly you’re at a character creation screen, wondering what happened to that other warrior. Then, a second character creation screen. Even though the game explains that you’re designing a Pawn -- an AI sidekick meant to assist the user-created main character -- we were left wondering who the hell was going to be our protagonist, anyway.

Dragon’s Dogma is an attempt to breed the open world exploration of Skyrim with the fierce combat of Capcom staples like Devil May Cry and Monster Hunter. You play as the Arisen, a hero chosen by fate to rid the world of an evil dragon that stole his heart. No, we don’t mean he fell in love with the dragon. That evil nuisance clawed his heart right out of his chest in the game’s opening cinematic.

While Dragon’s Dogma gets off to an awkward start, we recommend you power through it, since the good stuff isn’t far off. The choices you make during the hurried opening are not permanent, and once you reach the capital city of Gran Soren, you’ll soon be able to respec yourself and your primary Pawn, or select new classes entirely. This was lucky for us, since we found our initial pairing of Fighter and Striker to be ineffective. More importantly, being able to swap vocations easily is a boon, because each of Dragon’s Dogma’s specializations plays in a spectacularly different manner.

Fighter, Striker and Mage all serve as your basic warrior, rogue and magic-user set-up. Leveling different classes allows you to choose new skills that you map to the X, Y and B buttons. Upgrading an ability gives it a faster execution, wider area of effect, or some other perk more immediate than the typical “+1 to fire spells” of most RPG’s. Choosing new skills will let you design your own combos, rather than working a stat sheet.

There are also fantastic hybrid classes, which you’ll want to check out immediately. The Magic Archer’s enchanted bow lets him highlight multiple targets and unleash a flurry of homing arrows. The Mystic Knight can enchant his shield, allowing him to damage enemies while blocking. He can also summon a “magic cannon,” a sphere of energy he strikes with a melee weapon, flinging projectiles at his foes.

Making sure that you and your primary Pawn complement each other is essential to winning battles. Combat is built around the relationship between you and your AI team. It replicates the standard tank, healer and DPS structure of any MMO, but Dogma’s slick, real time combat gives it an immediacy other games lack.

The primary Pawn you design will be your lifetime sidekick, but you can adjust their class, behavior and equipment. The other two Pawns in your party can be swapped to suit your changing needs. Just visit a Rift Stone in any town to select new Pawns for your party. You can even use another player’s custom Pawn, which adds a great bonus. Dragon’s Dogma has an online feature that we used to select Pawns other gamers had designed. Our own Pawn was loaned out as well, but we were never without them. Other players simply used a copy of them, which synced with our own whenever we rested at an inn. Our Pawn would often come back with knowledge of a quest we hadn’t tried yet, eager to offer advice that was sometimes actually helpful. It’s an excellent feature.