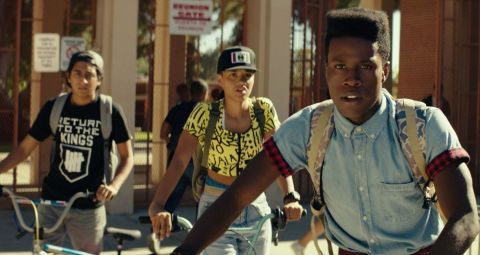 Famuyiwa’s teen pic mixes a cocktail of crowd-pleasing vim and political punch, lent charm and conviction by Moore – a star in the making.

Malcolm in the middle.

As Rick Famuyiwa’s festival hit reminds us right off the bat, ‘dope’ can mean drugs, an idiot or something rad. Call that fair warning for a film that won’t be pinned down.

More than a straight-outta-Sundance drugs-n-the-’hood movie, the fifth outing from The Wood writer-director Famuyiwa is also a fizzy coming-of-age geek-com, a crime caper, a romance of errors. And if that sounds like too much, think again: mixing pep and purpose, Dope lands with the punchy immediacy of its title.

Shouldering the extremes lightly is Shameik Moore as Malcolm, a flat-topped high-schooler struggling to survive in Inglewood, California’s “Bottoms”. When Dope seems to cast around for direction, it’s really sticking tight to Malcolm, a one-off everydude struggling to find himself on the cusp of youth and adulthood.

Head full of more pop-culture detritus than Scott Pilgrim, Malcolm loves ’90s hip-hop, his Nikes, his punk band and his friends, laidback Jib (Grand Budapest Hotel’s Tony Revolori) and lesbian Diggy (Kiersey Clemons). What he doesn’t like are the life/death choices he faces just getting to school: taking a wrong route might murder his hopes of getting laid.

The plot cranks up when trouble arising from the convergence of dream girl Nakia (Zoë Kravitz), tough dealer Dom (rapper A$AP Rocky), a backpack switcheroo and $100,000 of drugs forces Malcolm into a risky world of online narcotic enterprise, just when he’s trying to study for Harvard.

Toggling high stakes with low comedy, the ensuing farce is at risk of OD’ing on its supply, or on one tone at another’s expense. But Famuyiwa marshals what’s needed to energise the plot and put us into Malcolm’s trainers.

If the means are modern, the treatment of women is less so. Kravitz deepens an underwritten role, but Chanel Iman cameos mostly to facilitate a (funny, admittedly) sex-com set-piece. Such easy sexism is a shame, because otherwise Dope is empathetic and engaged, funny and forthright.

The climax gets preachy, but a dance is also involved: a canny one-two for an indie-flip film with lots to say and an issues film galvanised by youth’s crossfire energies.

Famuyiwa’s teen pic mixes a cocktail of crowd-pleasing vim and political punch, lent charm and conviction by Moore – a star in the making.