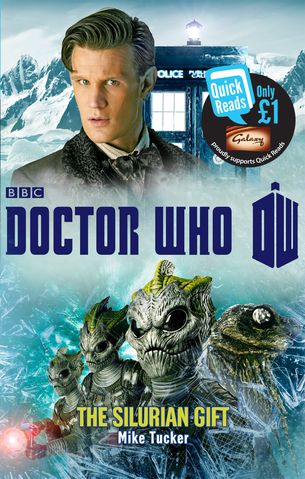 Here's the headline news about Doctor Who 's latest entry in the annual "Quick Reads" series (a worthy scheme to encourage reading via short, accessible prose): the Myrka is back!

Veteran Who fans will need no introduction to this reptilian monster controlled by the Silurians. On screen, it resembled a pathetic, lumbering green space cow (notoriously, it was operated by the same actors as the pantomime horse from Rentaghost ). Prose rehabilitates the Myrka as a fearsome, powerful beast.

It's far from the only returning element in this breathlessly brisk, ultimately action-packed tale, set in the Antarctic and concerning an Evil Capitalist's plans to exploit “Fire Ice”, a Silurian super-fuel. The bloody conflict that inevitably follows (featuring heat ray-packing Sea Devils and Navy helicopters in numbers that would stretch even the modern-day series’ budget) recalls 1984's “Warriors Of The Deep”, while the schism between a hot-blooded (metaphorically speaking) young Silurian and an elder who wants peace is torn straight from their 1970 debut. About the only interesting innovation is some “thermal armour” for their cold-blooded warriors.

Depending on your point of view, this means The Silurian Gift is either cosily familiar or predictably trad. Either way, a pound is a reasonable price for about an hour's worth of solid if slight entertainment.