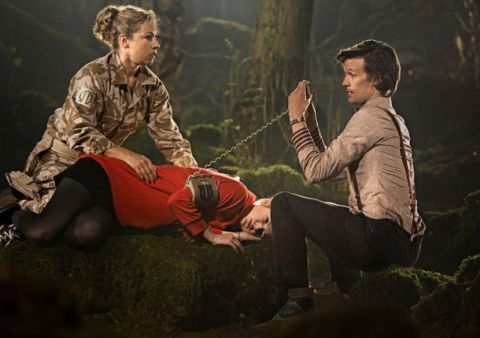 Remember when “Don’t even blink!” was one of the scariest things you’d ever heard? Well, now we know that was a bit of a wild overstatement. Because, actually, you can fool Weeping Angels just by pretending that you can see… And pretending pretty badly at that.

Okay, okay. The scene with Amy stumbling around blind, surrounded by Angels is very creepy, and it’s almost worth it just to see the Angels moving for the first time (which is very effective moment, accompanied by some eerie, grinding sound FX that seem to have been lifted straight out of the Talos sequence from Jason And The Argonauts ). And the Doctor does give us a line of dialogue about how they’re otherwise occupied at the time (in which case, why bother surrounding Amy in the first place?). But you can’t help feeling that these once great monsters come across a bit wussy and stupid.

It’s a shame because this sneaking sense that the Weeping Angels have been somewhat neutered overshadows an episode that otherwise rattles along in fine form. It’s very much a “part two”, with few new twists or surprises aside from the Crack gatecrashing the party; the situation was set up in part one, and here we see how the Doctor gets out of it. The forest “oxygen factory” provides a welcome new visual backdrop for the plot, but really, it's only cosmetic. They may just as well be running around corridors or caves.

Tense, action-packed, and stuffed with memorable one-liners and touching character moments, “Flesh And Stone” nevertheless doesn’t quite live up to the promise of the brilliant first part. Until the Angels are defeated, it all feels a bit one-note, and lacks a really good jawdropping revelation. Maybe the Crack is supposed to be that revelation, but somehow its arrival feels less of a shock and more of an inevitability. Though perhaps it is surprising to see it turn up as a handy plot device again so early in the season.

There are, however, plenty of touches of the Moffat genius. Amy’s countdown is a brilliant tension-heightening gimmick, and the scenes with the cleric having no memory of his vanishing comrades is very spooky (almost like something from Sapphire And Steel ). The Doctor’s final dialogue with the doomed Bishop (“I wish I’d known you better.” “I think, sir, you've known me at my best.”) must rate as one of the best-written and most affecting self-sacrifices scenes in the show’s history.

Once again (as in "The Beast Below” and “Victory Of The Daleks”), we have a very early denouement and a lot of character scenes afterwards, but at least here (unlike the save-the-android scene in “Victory”) it doesn’t feel like padding. It gives us another chance to see River and the Doctor verbally sparring, and they’re great, with River dropping no end of foreshadowing titbits. The Amy scene at the very end is fun if a little in-your-face but the final realisation that SOMETHING IS UP leaves the episode on a suitably “Ohhhhhhhh!” note.

Overall, then, a solid, exciting, pulse-pounding 45 minutes, but with enough minor irritations to stop it being the - ahem – stone cold classic we were hoping for from “The Time Of Angels”.

Amy Matters: Good grief - where did the sudden sex-craved Amy appear from? It was a bit full-on. Okay she’s been fantasising about the guy since she was a girl, but it made her come across as little crazy and stalkerish. Don’t be surprised if she's been writing slash fiction about the Doctor on the internet.

Plothole Polyfilla: And in one handy infodump, 90% of plot holes in New Who are explained away. Something doesn’t make sense? Ah, blame it on the Crack. The Doctor mentions the CyberKing in London having been written out of history, the fact that Amy doesn’t recall the Daleks and the lack of ducks on the Leadworth duck pond (why is he so concerned about that?), but presumably you can also use the Crack to explain why Van Statten doesn't recognise a Dalek either (in “Dalek"). Basically, there are no time paradoxes in Doctor Who anymore… Though you do wonder if Russell T Davies knew about Moffat’s plans for this season when he wrote “The Next Doctor” – there are certainly hints in that episode that the Doctor is already suspicious.

Double or triple bluff? Seems obvious that the man River Song kills is the Doctor, right? But could it all be a big tease?

Pandorica: Second mention of the season (after Prisoner Zero hissed about it in “The Eleventh Hour”) when Rivers tells the Doctor they will meet again "when the Pandorica opens”. Maybe it’s a new department store?

Should have gone to SpecSavers: We had to squint and freeze frame the picture to make out the shape of the Crack in the forest – Amy must have really good eyesight. And how many kids around the country went, “Mum! Dad! She’s going to die! She’s had her eyes open way longer than a second!”?