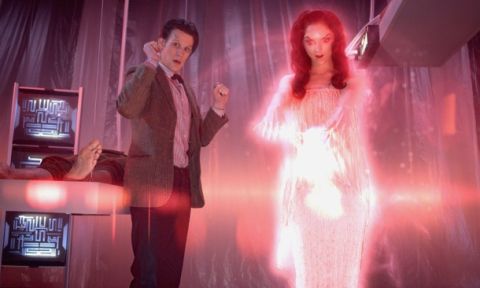 THE ONE WHERE: On the eerie, treacherous seas of the 17th Century a pirate ship is at the mercy of a beautiful spirit whose song seems to be death itself… Amy swashes, Rory buckles and the Doctor walks the plank.

WHAT WORKS: A chance for the show to breathe after the brain-twirling plotting of the past two weeks, this episode is high on shivery maritime atmosphere. Plaudits in particular to the eternally unsung heroes of the sound department, who conjure a lovely, briny ambiance from every creak of old timber and tinkle of trinkets in the rigging. The sight of Lily Cole’s unearthly mermaid rising from the ocean makes for a gorgeous, evocative visual, imagery that taps into an authentic tradition of nautical folklore. Elsewhere, it’s refreshing to see a Doctor who isn’t in instant possession of all the facts, but who reloads his thinking as events unfold (“Please ignore all my theories up to this point…”)

WHAT DOESN’T WORK: Pirates and Who should be as combustive a mix as gunpowder and a trusty flintlock, but ultimately this grog-time yarn falls short of its promise. While Webb has a fine eye for an atmospheric shot he’s less effective at manipulating the jolts and shocks, and Cole’s Siren never quite possesses the sense of menace she should. The revelation that she’s an automated program feels like an overfamiliar trope – there’s a nagging echo of “The Girl In The Fireplace” here – while the tarpaulin-tastic sickbay itself must be one of the most woefully impoverished sets in Who ’s recent history.

INFLUENCES: The title shamelessly slings a grappling hook at “The Curse Of The Black Pearl”, the first chapter of the Pirates Of The Caribbean saga. The Black Spot itself is a paranoia-inducing piece of pirate lore in Robert Louis Stevenson’s 1883 novel Treasure Island .

TRIVIA: Known as Long Ben or The Arch Pirate, Henry Avary – or Every or Avery – was a true-life sea rogue, making this story a kind of stealth “Celebrity Historical” (he’s also referenced in 1966 William Hartnell tale The Smugglers ). The circumstances of his death remain open to conjecture.

WTF: Amy’s prowess with a cutlass is truly remarkable. Sure, everyone’s living in mortal dread of a flesh wound, but she’s giving it some serious Errol Flynn against professional murderers. And no, I’m not buying a 17th Century sea dog piloting a starship. Not even if I’m plied with twelve crates of Captain Morgan.