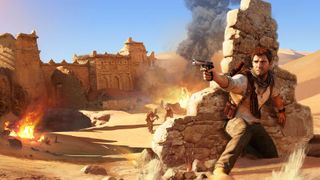 PlayStation heroes have graced cinemas before, of course. Let's not forget 2016's reasonably harmless Ratchet & Clank. Yet the creation of this new division shows there’s been a marked change in thinking at Sony about how it adapts its IPs for film and TV. From here on out, it will be Sony and Sony alone that dictates the artistic direction of all forthcoming PlayStation big– and small-screen spin-offs.

Led by Asad Qizilbash – who's worked in Sony marketing for over a decade – PlayStation Productions will produce projects internally. Why is this such a big deal? Well, in the past, Sony would often look to outsource potential PlayStation tie-ins to external studios… studios that probably knew diddly-squat about what makes your favourite PlayStation games so special.

Want to see what can go wrong when outside companies try to bring gaming heroes to the big screen? Look no further than the extra-toasty development hell the Uncharted movie has been stuck in over the last decade. Production companies such as Atlas Entertainment, Avi Arad Productions, and LStar Capital have all stuck their meddling ladles into Nate's increasingly spoilt broth, to little success.

What does this mean for the future of PlayStation TV and movies?

At least Drake's silver screen spin-off finally seems to be going in the right direction. Not only is Tom Holland officially set to play a young Nate, but Bryan Cranston is now being heavily linked to the project – by Walter White’s drug-peddling tighty whities, please let him play Sully. Still, it’s hard not to think the whole journey would have gone much more smoothly if Sony had developed the entire project internally from the get-go.

With the formation of PlayStation Productions, future tie-ins can hopefully avoid the chaos, confusion, and constant rewrites that have plagued the Uncharted movie. Place the right talent at the helm from the beginning – in other words, writers and producers who have an intimate knowledge and love of PlayStation IPs – and we should finally start to see video game movie and TV adaptations that understand and do justice to their virtual source material.

It also helps that Shawn Layden is overseeing the entire process. Speaking to The Hollywood Reporter, the chairman of SIE Worldwide Studios even referenced the MCU as an ongoing inspiration. "When fans beat a 40-to-50 hour game and have to wait three or four years for a sequel, we want to give them places they can go and still have more of that experience and see the characters they love evolve in different ways." God Of War: Endgame, anyone? We can but dream. In the meantime, cross all the digits PP can make the recently confirmed Twisted Metal TV show a success.

With the vast influence of Sony Pictures and its subsidiaries, which include Columbia and TriStar, PlayStation Productions should be able to draw on a considerable talent pool of experienced Hollywood veterans. Pair these movie and TV types with internal PlayStation people who love PS4, and Kratos and Aloy could conquer Tinseltown yet.