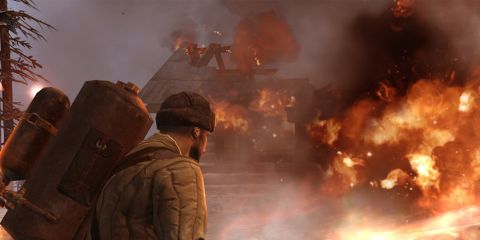 World War II is without a doubt one of the most dramatic chapters of human history, and it’s easy to see why the conflict has been the fodder for cheap, emotionally manipulative stories of bravado and sacrifice. Unfortunately, Company of Heroes 2 doesn’t do much to dispel that pervasive stereotype, hitting hard with overwrought and heavy-handed themes delivered by poorly written and clichéd exposition and even worse voice-acting. Thankfully, Company of Heroes 2 more than makes up for its ham-fisted narrative with excellent environmentally driven, tactical play that consistently reinforces the genuine desperation of the Soviet forces as they repelled the largest invasion in the history of warfare.

Eschewing the more common post-war glory typically given American recollections, the bulk of CoH 2’s story is given as a narrated flashback by former lieutenant Lev Isakovich as he faces interrogation in Stalin’s gulags. Even his victories are under the harshest scrutiny as his interrogator struggles to find the source of Lev’s growing cynicism with the Communist party and its agenda. If any contrast can be found between this and most other depictions of World War II, it’s found here. A far cry from the pseudo-propaganda so many games and films embody, CoH 2’s thesis, if it could be said to have one, is that war is far more horrific than anyone who hasn’t seen it firsthand could ever hope to understand. It isn’t noble and it isn’t glorious--a point poignantly reinforced by many of the game’s core mechanics.

Unlike most real-time strategy games, the meat of CoH 2’s gameplay avoids many of the standard “base building” tropes. Instead, the majority of your time will be spent on the front lines, carefully maneuvering your squads to and from cover and flanking the technologically superior German war machines. In these skirmishes the game actively encourages you to use the lives of your soldiers recklessly--flinging them into combat without concern for their well-being. With the exception of a relatively brief cool-down timer, more soldiers are always available and ready to be sacrificed for the glory of the Motherland. The experience is more than a little jarring and made that much more so by the realization that the events depicted aren’t too far from reality.

Throughout, one theme remains pervasive--the sheer desperation and absolute determination of the Red Army to stop the advance of the Wehrmacht. In every encounter, in every mission, the overwhelming force and power of Germany is made clear. For example, most German pieces can only be beaten by other German weapons. When a Panzer enters the fray, often your best bet is to distract the tank with a few conscripts while you search the battlefield for anti-tank guns or heavy explosives left behind by opposing infantry crews. Picking up weapons and storming enemy positions with the improvised equipment and strength-of-numbers is often a sound tactic.

Taking place as it does on the mostly frozen landscape of Russia’s northern countryside, CoH 2 makes excellent use of its environments to add an additional dimension to its brutal tactical play. Soldiers can suffer from frost bite, for example. Other environmental effects from previous installments in the series, including the ability to take cover in craters or the strategic destruction of buildings to kill or trap rival troops, is all still here, and together they make up one of the more appealing twists on the classic RTS formula. A clever commander should have little trouble manipulating his or her environment and creating new tactical opportunities.

Sadly, all of these great environmental options do come at a cost, namely, the user interface. The bottom third of the screen is dedicated, as usual, to the staples of the genre--resource stats, minimaps, unit abilities, and other options. Then, the top fifth is used for showing all of the units you have on the field. For those keeping track, that leaves a scant 50-ish percent for the actual game. With screen real estate at a premium, CoH 2’s designers apparently thought that dotted lines showing unit movement, dashed circles for attack ranges, tiny dots showing potential unit position, shields displaying cover status, icons for on-map weapons and supplies, etc. wouldn’t ever tilt into the realm of ‘information overload’. This problem is exacerbated by the fast-paced nature of play, which requires almost constant micromanagement of every piece on the field. It’s easy to lose track of your resources and units amidst the chaos.

Campaign play translates quite well to multiplayer, such that the strategies needed to carefully balance territory and positioning learned alone will often work against human opponents. Execution challenges like those found in some of today’s more popular strategy games and MOBAs aren’t as big here. Instead, victory will typically rely on your ability to out-think your opponents. That focus on strategy and tactics is refreshing and brings CoH 2 in line with games like Civilization, though with a clear emphasis on the brutality and despondent tone of that particular era of history.

All-told, Company of Heroes 2 is a worthy, if not excellent, heir to the franchise’s legacy. While not quite as innovative as the original, Company of Heroes 2 does little wrong besides weigh itself down with the mildly superfluous and fail to push the envelope of video game narrative--though at times it really seems desperate to try. From a purely mechanical perspective, there’s enough recycled material to give fans of the 2006 entry their due, while adding enough subtle new features to bring in at least a few fresh faces. As it stands, this will probably be one of the best strategy releases this year, even if it doesn’t quite attain the status of all-time classic.