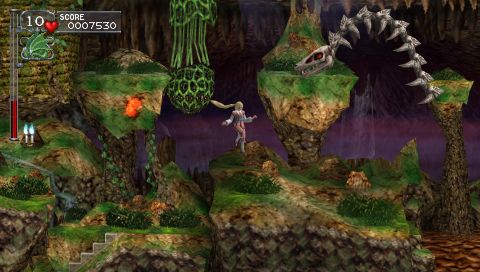 After years of delivering the goth-gaming goods to Nintendo's GBA and DS, Konami is finally putting the sharpened stake in the hands of PSP players with Castlevania: The Dracula X Chronicles. The drac-slaying series makes its Sony portable debut with a re-mastered version of 1993's previously Japan-only Castlevania: Rondo of Blood.

For faithful fans, this alone is enough to hammer the must-buy nail into the coffin. But add to this un-lockable versions of the original pixel-perfect Rondo and the PS1 favorite, Symphony of the Night, and you've got a deal rivaling The Orange Box's recent goodwill. Sadly, only hardcore vampire hunters will truly appreciate this title due to its punishing difficulty - we're talking NES Ghosts 'n Goblins difficult, here.

Don't misunderstand, we love a good challenge; just ask our blistered thumbs after an all-night Ninja Gaiden marathon. What we don't appreciate is a challenge falsely padded with unforgiving save and checkpoint systems. Can't complete a level in four lives? Plan on replaying the entire stage until you can. Most gamers, after traversing the same creepy castle multiple times only to be sent packing by a brutal boss battle, will have about as much fun as a vampire that's had his mouthwash secretly swapped with holy water. If that wasn't painful enough, the title's best bonus - Symphony - can only be played after completing Rondo in a very specific way.

With that said, if you're a serious Castlevania fan, or just yearn for the days of trial-and-error gaming, then there's lots to love here. The gameplay is classic Castlevania; as a whip-wielding Belmont you'll take on the expected macabre menaces - Mermen, Fleamen, bone-tossing skeletons, those annoying-as-hell floating Medusa heads and, of course, amazing bosses. When you're not whipping the bejesus out of baddies - and heart-revealing candles - you'll equip the sub-weapon staples: holy water, bibles, daggers, axes and crosses.