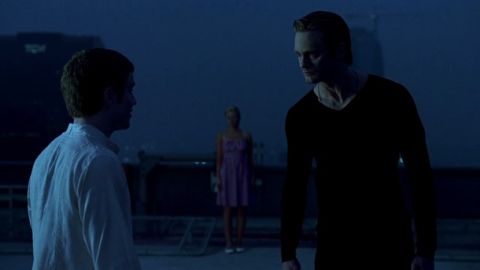 2.09 “I Will Rise Up”
Written by Nancy Oliver
Directed by Scott Winant

THE ONE WHERE Sookie is tricked by Eric into sucking silver from his chest; Jessica meets Hoyt’s vamp-prejudice mom; Godric meets the sun.

VERDICT Picking up right where the previous episode left off, the Fellowship of the Sun’s suicide bombing killed a lot of background vampires (Bill, Eric and Godric managed to survive the attack) and a few human companions (Jason managed to escape unharmed and Eric acted heroically by using his body to protect Sookie from the blast.) Although the destruction from the bombing was graphic – the only thing left of suicide bomber Luke was his hand and a puddle of goo – it felt a bit lacklustre with no main characters actually being killed or seriously wounded. I was also at least hoping for some sort of retaliation from the vampires, but nope... nothin’. Instead it was all politics. C’mon vamps, grow some sharper teeth will ya!

Sookie drinking Eric’s blood is a huge character and plot development – Eric been trying to snag Sookie since the beginning of the season – and this newly-formed emotional bond between the two of them means that not only will Sookie be having some very naughty fantasies of Eric (Hooray!), but her feelings for Bill may start to wane. By the end of the episode we already see Sookie starting to feel for Eric; the blood-tears streaking down his cheeks was heartbreaking and adorable, and you really can’t blame her for wanting to comfort him. This emotional scene with Godric, Sookie and Eric is the first time in the series that Eric shows any kind of sadness and vulnerability, so it was refreshing to see more depth to his character.

Another touching scene was between Sookie and Jason that finally saw them bond as brother and sister. There’s been some great character development for Jason this season – I reckon he’s still trying to find out just what sort of man he is – and finally realises that he has genuine love for Sookie. It’s great to watch that sentimentality from him.

The other must-watch couple continues to be Jessica and Hoyt, who in this episode hit another snag in their relationship when Hoyt’s mom doesn’t approve of his new vamp girlfriend. Well, it wasn’t a surprise to see that reaction from Hoyt’s mom. But he admirably defends his feelings for Jessica and chooses her over his mother. Good for Hoyt for not being afraid to follow his heart! Although he was more of a background character last season, he’s very interesting to watch this season. Hopefully Jessica and Hoyt’s romance will continue because they’re really just too cute to watch, am I right? But with all the problems they seem to be encountering so early on into their relationship, something tells me that their future together isn’t looking so bright (pun intended.)

Godric sacrificing himself – for politics – was a great scene that had beautifully-written dialogue and cinematography. However it’s a shame that Godric’s character wasn’t developed more in previous episodes because his death really didn’t feel like that much of a loss to the show. I’m disappointed that there wasn’t more back story or fleshing out of his character.

Now that everything in Dallas seems to be somewhat resolved it’ll be good to see Bill, Sookie, Jason, and Eric back in Bon Temps and dealing with this pesky Maenad problem. And with the town under the influence of Maryann – it’s shocking that everyone hasn’t humped each other to death – they’ll definitely be in for a surprise when they get back. Home sweet home? I reckon, no.

EWW! GROSS! Determined to make this bond with Sookie, Eric tricks her into sucking the silver shrapnel out of his chest. Is it strange that I found this scene really gross but also really sexy?

VAMPIRES 101 The older a vampire is, the quicker he or she will dusted by the sun as Godric reveals here: “It won’t take long, not at my age.”

ADD IT TO YOUR iPOD Also the title of this episode, Lyle Lovett’s “I Will Rise Up” is the hauntingly beautiful song playing when Godric is burned-up by the sun.

BEST LINES Bill: “You’re connected. He'll be able to sense your emotions.”
Sookie: “No! No!” [Turns to face Eric] “You big lying A-hole.”
Eric: “Bill I think you're right. I think I can sense her emotions.”