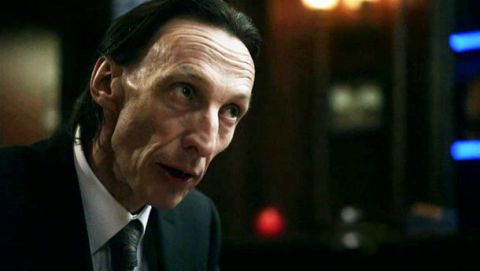 THE ONE WHERE Needing all four horsemen rings to stop the apocalypse, Bobby agrees to temporarily sell his soul to Crowley in exchange for information about Death’s whereabouts. Sam and Dean catch a few deadly viruses from Pestilence, but luckily Castiel heroically intervenes.

VERDICT With the season finale airing next, there seemed to be a lot packed into this episode: Sam and Dean managed to get the rings from Pestilence and Death, Bobby sold his soul to Crowley, Cass is totally human now, and the Croatoan virus has kick-started the zombie apocalypse. There was so much stuff going on, my adrenalin is still pumping. I just hate that I have to wait till next Thursday for the finale to air here in Canada!

The slow motion scene as Death walked on a windy Chicago sidewalk with the Jen Titus song “O Death” playing was effective for its eeriness and made it to be by far the best and most memorable scene in this episode. Its cinematography helped to portray Death as the most powerful, dangerous and intimidating of the horseman. Because of Death’s really cool entrance, it’s easy later on in the episode to understand Dean’s paralysing fear of him. Every scene with Death was intense, and really enjoyable.

It’s heartbreakingly cute to watch Castiel now that he’s completely human, isn’t it? He was even in the hospital the poor thing! But I’m glad that they haven’t made him into a completely helpless character – even injured he manages to save Sam and Dean from Pestilence. What a hero!

One of the most shocking moments was seeing Bobby being able to walk again, thanks to Crowley. Surprising, and a really touching moment. So... does that mean Crowley is one of the good guys now because of the favour he did for Bobby? I’m really confused with Crowley’s character, but that’s what makes him so intriguing! I’m really feeling a lot of suspense, wondering if Crowley will actually keep his word and return Bobby’s soul. But however they write him, I’m always quite giddy while watching Mark Sheppard as Crowley. He’s such a fantastic actor.

Another surprise is Dean agreeing to Sam’s plan of saying “yes” to Lucifer in order to trap him in the cage. Even when they learn from Crowley that Sam will have to drink gallons of demon blood when he’s Lucifer’s meat suit, Dean still didn’t argue about that major consequence/risk in the plan. That seemed very out-of-character for Dean... perhaps Dean has his own secret plan, and will stop Sam at the last minute before he says “yes” to Lucifer?

With Sam potentially fighting Adam (who is – surprise! – now Michael’s meat suit) to the death, Bobby’s soul in loan to Crowley, and the zombies starting to walk the Earth, the suspense for the finale is almost unbearable!

GUEST STAR 1 Matt Frewer (I know him best as Jim Taggart from Eureka ) did a great job as Pestilence. It’s a shame we didn’t get to see more from him – the character was defeated quite early on into the episode, surprisingly, by a now all-human Castiel.

GUEST STAR 2 Don’t you just love Mark Sheppard as Crowley? Every scene with him is hilarious – his character has great personality, especially in regards to his promiscuity. And he’s the only demon on the show who has the ability to teleport – what’s up with that? When Castiel was able to teleport anywhere he wanted... could that mean that Crowley is really an angel in disguise? Hmm...

GUEST STAR 3 With his thin, lanky bone structure, Julian Richings is perfectly cast as Death. Death’s willingness to give Dean his horseman ring is a little suspicious though, isn’t it? Perhaps he has ulterior motives, and will make an appearance in season six as the “big bad.”

ADD IT TO YOUR iPOD It was hard not to tap your foot along to “O Death” by Jen Titus. It’s the perfect theme song for Death.

ZOMBIELAND With the Croatoan virus ready for mass distribution disguised in the form of a Swine Flu antidote, the human population is about to turn into rage-infected zombies. Perhaps a hint of what we’ll see in the season finale when Crowley references the 2009 hit post-apocalypse hit Zombieland: “This time next Thursday, we’ll all be living in Zombieland.”

BEST LINE
Death: [Concerning Lucifer] “I'm more powerful than you can process and I'm enslaved to a bratty child having a tantrum.”