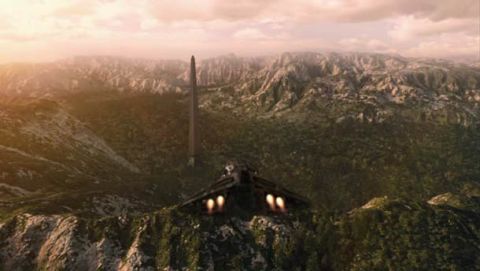 THE ONE WHERE When a team is shuttled down for a month-or-so to an idyllic Earth-like planet to collect supplies, Col Young has a tough time getting everyone back on board Destiny when it’s time to jump back into FTL.

VERDICT Although it’s not as action-packed as the previous episode, “Faith” was still enjoyable, with some new plot developments and a couple great scenes that built unlikely bonds between characters.

With Chloe on the team that’s surveying the alien planet, it gave Eli an opportunity to bond with Camile – one friendship that I didn’t see coming! The time-frame of this episode takes place over about a month, so it was plenty of enough time for Eli and Camile to become confidantes and find comfort each other. And because Eli feels betrayed by Chloe (she was a bit conniving and didn’t include him in the plans for the civilian coup) it’s more than fair for him to look for a new connection with someone else. It’s also refreshing to see this close friendship on the show without any of that pesky sexual tension. The scenes with Eli and Camile were heartwarming, and I hope their friendship continues to be highlighted more throughout the rest of the series.

Chloe and Tamara also formed a tight bond while on the planet when Tamara confides in Chloe that she is pregnant and that Col Young is the father. Although I’m still waiting for the writers to do something interesting with Chloe other than having her always in peril, I’m happy with the new character development for Tamara Johansen. Although it isn’t too shocking that she’s pregnant with Col. Young’s baby, is it? After all the writers did make it clear from the first few episodes of the season that he cheated on his wife with her. One thing is certain: life on Destiny has just got a lot more challenging and cramped for Tamara. But at least Chloe is there to sympathise...

Something different was seeing Dr Caine as a background character having a more major role in this episode whose purpose was to preach that the idea that it was the almighty gods that brought Destiny on the path leading to the artificial planet. No one was really buying it, though. Although it was nice to see some of the characters get some sunshine and exercise, being stuck on board Destiny seems to be their real, ahem, destiny.

THIS GREAT LAND It may be an artificial planet terra formed by aliens, but it still looked a lot like Vancouver, BC, Canada to me.

PROJECT GENESIS An artificially-created planet isn’t an original idea, but it worked well for this episode. We never find out who the alien creators of the planet are, so it’s a great plot thread left to develop later on in the series. And I couldn’t help but giggle at the Star Trek reference. I also yelled out, “Khaaaaaaan!” a few too many times according to my husband who happened to be sitting on the couch with me watching the episode. I make no apologies.