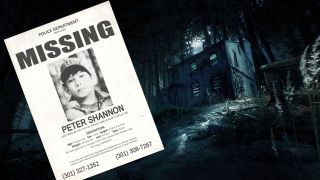 Can a small indie game team from Poland escape the curse of the Blair Witch? Not the actual magical curse that has people sniffing the wallpaper in abandoned, spooky houses, but the one that has afflicted every movie that has come since the iconic original Blair Witch Project in 1999.

Bloober Team – creators of Layers of Fear and Observer – worked with movie studio Lionsgate to create a new Blair Witch game, the tale of former policeman Ellis (and his dog Bullet) who head into the Black Hills forest to find a missing child.

"Ellis is an ex-cop and he has a troubled past, and exploring this past is a very important part of Blair Witch," explains the game's narrative designer Barbara Kciuk. "If you've played our previous games you know that we focus a lot on who the characters are, what their past is, what their feelings are. We really dive into the psychology."

"In Blair Witch this is one of the things we're using as the premise, his past. We really wanted to explore what can break a person and how it can be used against them."

According to Kciuk, one of Ellis' most important qualities is his weakness in the face of dark magic. Bloober wanted to "create a protagonist that will be vulnerable to the witch's powers and will be able to really show the extent of those powers."

Not that it will always be clear whether what's happening in the forest is the witch at work, a dash of good old fashioned insanity, or both. "We don't want to distinguish it too much. It's like the first movie, you never really knew if – in fact in every movie of the Blair Witch – you never know if what is happening is real or not. If the witch even exists. In a sense we can also do that in the game, maybe it's just that Ellis is losing it?"

Of course, Ellis doesn't have to take on the forest alone, he's accompanied by his trusty hound Bullet. Who – yes – you can pet.

Bullet to the heart

"We wanted to have someone for the player to interact with, to connect with, and to share this experience. Normally in Blair Witch, it's about a group of students venturing into the forest, but we didn't want to do that," says Kciuk.

"We wanted this feeling of loneliness, while also having someone to connect with. Giving him a dog is perfect because you connect with animals very easily, they have totally different skillsets, their senses are keener, but they can't solve the puzzles like you do. Bullet is also less susceptible to the witch's curse, so he can do different things to you. That's great for both the mechanics and the story."

Despite my best attempts, I couldn't get a cast-iron guarantee out of Kciuk that Bullet won't die, but it sounds like if he does, it won't be my fault. "I would say that gameplay-wise, he won't die, because we didn't want to make it an escort mission. That was something we really wanted to avoid, escort missions are the worst. But storywise I won't take away the suspense and tell you what happens. No spoilers."

What Kciuk can talk about is the real star of the show, the Blair Witch herself. Described in the original movie as an old woman who floats and inspires locals to kill children and engage in ritualistic murder, in Blair Witch the game she permeates every nook and cranny of the world. Even if you never actually get to see her.

"We believe that part of the Blair Witch is that the unknown is the scariest," Kciuk explains. "We want to make her a force that you can't really comprehend so in the end, we have our vision but this is something you need to experience. This is not something to talk about, like 'the witch is this and this and she does this because she wants to do that.' You need to experience what she can do with a person, what she can do with their memories, to really see the extent of what her character can be."

Kciuk and Bloober worked closely with Lionsgate, getting "a lot of insider knowledge," on the mythology of the story, but if you were hoping for some sort of Blair Witch boss battle where you can take her out with a rocket launcher you might need to change your expectations.

"In our vision, the witch isn't a physical entity. It's more the forest, she can do anything in the forest. She has a power that can twist the reality around you. So seeing her... that's not really something we want to do. We want to make you feel her, to feel her oppressive presence."

Things that go bump in the night

You will get glimpses of her minions, strange creatures that lurk among the trees and hate the light. "We didn't want to make traditional combat, and we wanted to make finding them in the environment important," Kciuk reveals.

"The creatures are a manifestation of the witch in a sense, they are not the witch but she can send them after you. We wanted to carry on the thought that the more you know the less scary it becomes, so you never really see them. You can't go up to the corpse and see how they really look. We want to leave that ambiguous, you can't really explore the creatures because it's just a witch minion and here to hurt you. You're supposed to escape them, not just be interested in them."

If you are interested in what the Blair Witch, and her monsters, have in store for you, you won't have to wait much longer to play. The game will be released on August 30 on Xbox One and PC.

From bumps in the night to toothy creature features, here are the best horror movies to turn your dreams to nightmares.