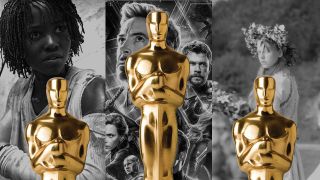 The Academy Award nominations for 2020 were announced, and everyone - even the presenter Issa Rae - was quick to notice the stale, pale, male theme running through some of the major categories. You can check out the full list of Oscars nominations 2020 -  congratulations to those men - and then see what our team of intrepid entertainment hounds would have nominated if they were on the judging panel.

Remember Us? The Academy certainly doesn't, because Jordan Peele's skin-crawling thriller deserved more than a few nominations and got precisely zero. That's not exactly surprising. It's a horror movie that came out relatively early in the year, things that the Academy hates a lot. But Lupita Nyong'o's dual performance is arguably the best of last year, tying the movie together as the panicked lead of the film, as well as the sinister figure terrorising her and her family. Either role would usually merit some awards chatter, so to have two in the same film should have been a guarantee that Nyong'o at least got a nomination. There's plenty of decisions to drag The Academy over the coals for this year, but this one ranks particularly high for me. Ben Tyrer

How are you gonna nominate the rest of The Irishman cast but not Bobby D? What are you, pazzo? This man is an icon, and with a late-career performance this strong, one that pumps blood through the heart of the film, he deserved a nomination. He's understated, he's measured, he's quietly powerful before he's quietly remorseful - it's beautiful and simple and powerful. Not to mention he reminds me of my Gramps, who is worthy of an Oscar himself (hi Pasquale). DeNiro hasn't won an Oscar since Raging Bull and he deserved a win forty years later, you coglione. Giving him an Oscar for this would have been as enjoyable as Russ Buffalino's wine-dipped Italian bread. Uffa! Alyssa Mercante

"Congratulations to those men," Issa Rae said after announcing the all-male Best Director nominees. The category has been continuously – and wrongly – dominated by men since its inception. Yet, what's undeniably outrageous this year is that Greta Gerwig was right there! You know, that same Greta Gerwig who directed one of this year's Best Picture nominees, Little Women. That same Greta Gerwig who managed to transform a classic American story that's been adapted countless times and still somehow make it feel fresh. That same Greta Gerwig whose first two films have been borderline perfect cinema (Lady Bird and Little Women sit at 99% and 95% on Rotten Tomatoes, respectively). I'm not saying Quentin Tarantino, Martin Scorsese, and Bong Joon-ho didn't deserve their nominations – they did – but Greta surely deserved to be there with them. Jack Sheperd

Make that two for Endgame. Now, I may not be a music buff – I certainly don’t know my clefs from my castenzas – but I do know which track I couldn’t get out of my head all through 2019 – and that was Alan Silvestri’s Portals.

Don’t know it? You’ve almost certainly heard it. It backs the ‘On your left’ scene in Endgame’s final act as the Avengers finally assemble. Portals elevates a fantastic fan-pleasing scene into an all-time great, one that many of you have probably hit rewind on again and again over the past few months. And, let’s face it, it’d be nothing without the music. Bradley Russell

While it's rightfully nominated in the special effects category, the Oscar's acknowledgements for Avengers: Endgame as one of the best movies of the year are nowhere to be seen. Face the facts, academy: Marvel's blockbuster represents one of the most ambitious achievements in the history of cinema, successfully weaving together a decade's worth of work to deliver an incredibly smart, emotionally resonant, and inherently satisfying finale to the MCU as we know it. Plus, I love the idea of watching Martin Scorsese's face were The Irishman to lose to the movie he's been deriding for the last six months as "not cinema". Talk about missed opportunities. Alex Avard

I didn't expect Midsommar to win against bonafide Oscar bait like The Irishman, 1917, and Joker (apparently). But not a single nomination for the brilliantly bright, menacing, comforting Midsommar? The only possible explanation is the Academy's infamous distaste for horror. Only six horror movies have ever been nominated for best picture, and only one - The Silence of the Lambs - has ever won. It's hard not to feel like a relic of decades past when horror was considered an illegitimate genre (particularly the gory ones, which were more or less treated like pornography). Midsommar's nomination snub is one more data point in the great big chart that shows how irrelevant the Oscars are in 2020. Connor Sheridan