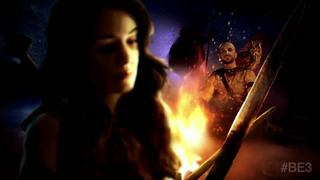 Last year, Bethesda’s E3 announcement of plans for a strategy card game caused some head-scratching. What would that iteration of the Elder Scrolls universe have to add to an already crowded game genre?

Pete Hines, Bethesda Softworks’ global vice president of PR and marketing, briefly talked today about the plans for the game, with a new trailer at the company's E3 press conference. Legends brings some new alternatives to the standard card-slinging format, including a two-lane game approach and a card upgrade system.

The card game will have a focus on narrative. A moth priest named Kellen will be the player’s guide, and the intro cinematic for the campaign sets the stage for that story.

The game is set for a launch later this year on a full set of platforms: PC, iPad, iPhone, Mac, and Android tablets and phones. It’s currently in closed beta, but Hines said they’d open it up to more players soon. Check out the Bethesda website if you want in on the action.

Check out every announcement and full summary details on our Bethesda E3 press conference page.

Anna likes games about solving puzzles and/or shooting things. She wishes she could trade zingers with GLaDOS and have beers with Garrus Vakarian in real life.