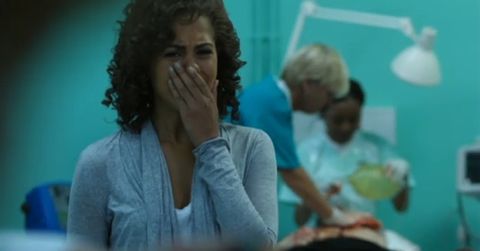 THE ONE WHERE Vampire first contact is averted. But at massive cost to the awesome foursome.

VERDICT Well you can never accuse Being Human ’s creator Toby Whithouse of bottling on the big decisions. With Hollywood knocking on Aidan Turner’s door and him heading off Hobbitwards, it was sensible to expect Mitchell would be departing Barry one way or another at the end of this series. But to have George kill his best friend? Wow, even for Being Human that’s brutal.

Turner’s exit is a tour-de-force – Mitchell’s complete unravelling is devastating and desperate, with Herrick’s pronouncement that he’s as “mad as a gibbon” not entirely unfair under the circumstances. The performances are uniformly strong with George’s shamefaced acknowledgement that he knew of Mitchell’s murderous ways and guttural screams of grief at Nina’s “death” stand out moments, at least until the final exhausting ten minutes. Whithouse’s script cleverly subverts audience expectation – everyone who was convinced that Mitchell would be ending the season as a pile of dust feels smug as George picks up the stake, only to breathe out again as Wyndham arrives and the threat is averted… for a moment at least.

Speaking of Wyndham, the prospect of a new threat for our heroes is interesting but you can’t help thinking, old one or not, he’s a bit rubbish. He doesn’t expect (and can’t stop) George staking Mitchell, and it seems a bit unlikely that a room full of coppers would really take his word that they were fired and leave without some serious identification – telling them he’s the Man from Del Monte just wouldn’t cut it, and in a show that prides itself on being realistic felt quite jarring.

There are a few other quibbles. A final episode can arguably by definition never quite live up to the promise of the cliffhanger that precedes it, and in this Being Human is no exception – not least because the last 15 minutes of episode seven are so corking. There are so many strands to tie up (or at least address) in a short period of time that some of them get shorter shrift than others. After all that, it turns out the wolf-shaped bullet is all smoke and mirrors, and the resolution of Lia’s story is quick, her revenge a bit of a damp squib (and punctuated with a terrible rhyme – “come to purge-to-ree, stop shit getting gory...” – that proves she wouldn’t have made Poet Laureate if she’d survived). Similarly, while Nina’s recovery will be a relief as much to fans who love her as to George, it feels unlikely she’d have been discharged from hospital that quickly as a pregnant woman who’s just been stabbed if not for the fact that in storyline terms she’s such a vital part of the awesome foursome that she needs to be there for Mitchell’s last moments.

These are minor things though, in an episode that is shocking, heartbreaking and showcases all the best traits of Being Human in terms of writing, direction and cracking acting. It takes courage to risk fan wrath despatching Mitchell in such a way, but the result is brilliant – shockingly brutal, poignant and perfect. Nuanced performances from the big four and (as ever) Jason Watkins make this intense stuff – although you can’t help worrying how on earth Toby Whithouse et al are going to top this (and indeed pick up the pieces) in series four. While undoubtedly the final five minutes are going to cause controversy, all you can hope is that people get over the shock and have some perspective to it. It’s an incredibly brave and very well written exit - and exactly the kind of shocking, dark, moving thing that you’d hope for from Being Human . Let’s face it, it’s not EastEnders , is it? You could hardly send Mitchell off in a taxi...

LOOSE ENDS Will the normal life McNair hopes for Tom involve becoming a permanent resident in Honolulu Heights? Will George, Nina and Annie even stay there now after all that’s happened?

GONE BUT NOT FORGOTTEN Nice references to Gilbert and Seth

MOST INSIGHTFUL PREDICTION Herrick: “There’ll come a day when one of us finally kills the other.” Mitchell: “But it won’t be today...” It turns out it’ll be tomorrow in memorable fashion – although was it just me who thought the creepiness of the last lingering smile of Herrick was negated somewhat by the slightly ropey CGI of him turning to dust?

POP CULTURE REFERENCE OF THE WEEK Herrick admitting to drinking Nespresso was good, but for sentimental reasons it has to be Mitchell’s last reference to The Real Hustle . Sob.

BEST LINE:
Mitchell “Thank you, all of you. You made me human.”

* So what did you think? Have your say on the final episode of Being Human series three in the comments below. And go here to view our exclusive chat with creator Toby Whithouse about writing the last episode and dealing with Aidan Turner becoming a hobbit...