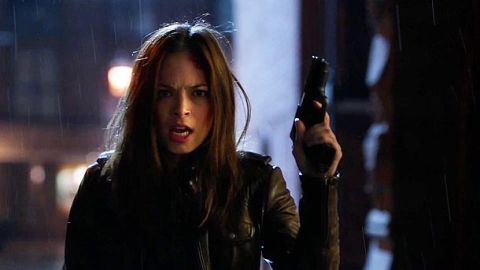 THE ONE WHERE Catherine recovers from being run off the road and meets Vincent’s ex in the hospital. Hijinks ensue.

VERDICT After the genuinely shocking cliff-hanger before the Christmas break, this episode hits the ground running with the revelation that Sabrina Meyer managed to shoot Catherine. Creepy ME Guy quickly MacGyvers a way to stabilise Catherine at the crash site and is actually pretty cool while doing it. There might be more to him than meets the eye; we’re actually considering calling him Evan instead of Creepy ME Guy. Only considering mind...

It’s a bit of a cop out that Creepy ME Guy doesn’t seem to see Vincent pull Catherine out of the car but there is a little hint of suspicion and the feeling that Creepy ME Guy isn’t saying everything. Especially considering his meeting with JT later in the episode regarding the continuing investigation into the vigilante and cross DNA species. He’s obviously not going to let it drop.

The rest of the episode is a little too reliant on coincidence; that the nurse treating Catherine is Vincent’s ex seems a little too much, and it’s pretty silly of Vincent to take his disguise off when he’s still in the hospital as it’s the place he’d be most recognised. It’s also a little bit lame that Alex just happens to have a stalker. For the brief moment that Catherine thought Muirfield might be involved we perked up. Muirfield keeping tabs on Vincent’s known associates makes a lot of sense. It was very disappointing that they weren’t actually responsible for the man watching Alex and that he turned out to just be a random mad stalker bloke. Muirfield has been absent from the show for far too long.

Vincent gets a bit more back story; it seems he was engaged to Alex before he went off to the fight in Iraq and then didn’t contact her when he faked his death. Once again we have something to throw in the path of the Vincent/Catherine love story. At least the two leads have an adult conversation about it and don’t just silently sulk. Having the characters acknowledge that they really do have feelings for each other and that Alex turning up could be a possible problem is at least a step in the right direction. From the coming-next-week advert it looks like Alex is going to be around for a while, so what her presence will do to the on-going dynamic remains to be seen.

Vincent’s evolving Beast problem is acknowledged and the idea of his DNA mutating is touched on. He even develops cool glowy-eyes night vision in this episode and seems to have a measure of control over his changes.

As mentioned above, Creepy ME Guy is hot on the trail of the cross DNA creature aspect of Vincent and shows up to talk to JT about it. Silly JT writing a paper on the subject and actually putting his name on it! It’s supposed to be secret. Just how long Creepy ME Guy can be on the scent before he finds out the truth we don’t know, especially considering just how naff JT’s poker face is. We think they should just tell him everything and make him one of the gang.

On the whole this episode is better than most, maybe even the best of the series so far. There are still a few moments when the show reverts to the lame standbys of its past; when Vincent first shows up there’s instant yawn-worthy angst and Police Partner turns up and starts talking about her love life straight away. One track mind that one.

Except for these little irritations the episode is actually pretty good. The break from the crime-of-the-week format actually lets the show breathe a little. We didn’t miss the procedural stuff at all. Whether this will continue remains to be seen. At the end of last year we found ourselves really hoping that this show was finally improving and with this episode we’re actually kinda starting to like the show now. How on Earth did that happen?

THAT ’80S SHOW JT mentions Manimal when talking about Vincent’s possible DNA mutations. And Vincent makes a sly reference – we think – to the original Beauty And The Beast TV show (see Best Line below).

MURDER DEATH KILL No crime-of-the-week this week, but Vincent’s ex-fiancé Alex has a stalker that needs dealing with. Vincent kills him, with a gun, which is novel for him.

STALKER BEHAVIOUR OF THE WEEK Vincent breaks into ex-fiancé Alex’s car and waits for her. And it seems Alex has got an actual real stalker; she’s filed six police reports and the guy has been regularly breaking into her house and intercepting her emails. Catherine gets in on the act and stalks Alex on Facebook and later goes through Alex’s love letters from Vincent. She even steals a photo. Creepy ME Guy takes a week off from being creepy.

BEST LINE
Catherine: "Even though you DNA is changing, that doesn’t have to change things between us."
Vincent: "You say that now, but just wait till I sprout whiskers and a tail."

• Read our other Beauty And The Beast reviews