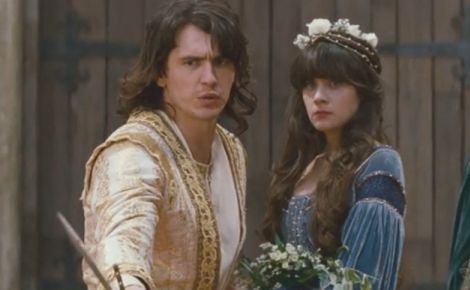 For a Medieval comedy that’s sat in the studio dungeon since last year, all of a sudden Your Highness is hotter than a shovel-full of coals in your britches.

That’s what casting Oscar-baiting Natalie Portman and James Franco will do for you. but then Your Highness is really the brainchild of co-writer/star Danny McBride, who reunites with Pineapple Express director David Gordon Green for a crazy, crude tribute to fantasy films from the VHS era (Beastmaster, Willow, Krull et al).

It starts promisingly, as Thadeous (McBride) narrowly avoids being hanged in a dwarf village for insulting the little people. Annoyed by his lowly status in the court, he even gets servant Courtney (the excellent Rasmus Hardiker, who played Steve Coogan’s sidekick in Saxondale) to amuse him with a selection of stupid faces.

A Blackadder/Baldrick vibe hangs in the air, not least when Thadeous chastises Courtney for one particular mugging. (“No, never triangle face!” he scolds. “I hate triangle face – it scares me!”) soon enough, the cowardly Thadeous must man up and join perfect older brother Fabious (Franco) on a quest to rescue the latter’s bride-to-be (Zooey Deschanel) from the paws of wicked wizard Leezar (Justin Theroux).

Where Your Highness scores is in the casting. Portman kicks butt as Isabel, a deadly archer they meet along the way; Franco is fab as the stupidly brave sibling and Theroux (the cuckolded director in Mulholland Drive) outshines them all behind his ghastly prosthetic teeth.

Where it falters is in the script, which is under the impression that the word ‘fuck’ is always the perfect substitute for a witty riposte. A pity, because there are some cracking ideas here – not least the rudest puppet since peter Jackson’s Meet The Feebles, a weed-smoking sorcerer who has evidently been copping a feel of Fabious since he was a nipper.

As for Green, having morphed from the sensitive arthouse director of All The Real Girls into this generation’s Harold Ramis, he marshals the film well enough, even if he’s guilty of swamping the final third with an excess of FX.

In the end, while there’s a lot of affection for the films that inspired Your Highness, it’s really all about teenage titillation: swearing, boobs (a whole village of nude savage women) and Natalie Portman bathing in a thong. But if like your humour strictly below the waistline, get behind this posse. Ahem.