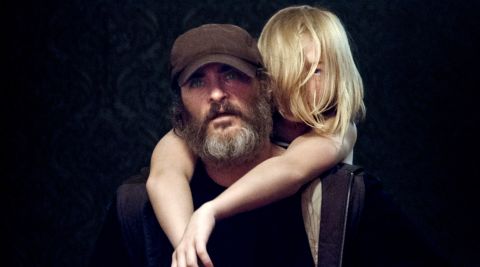 Lynne Ramsay returns with a scuzzy, stripped-back thriller focused on the man, rather than the mission.

When Lynne Ramsay’s stark hitman thriller premiered at last year’s Cannes Film Festival, word was the writer/director had been editing until the last second, submitting the print while it was still dripping. Not that you can tell – this deep dive into a fractured psyche is executed with scalpel-sharp precision.

Adapted from Jonathan Ames’ hardboiled novella, it’s the type of film that’s fallen out of fashion in recent years: a no-frills neo-noir that, at a brisk 89 minutes, doesn’t squander a single frame.

Joaquin Phoenix stuns as Joe, a veteran who makes a living rescuing young girls kidnapped by sex traffickers, and is notorious for the retribution he wreaks on the men responsible. Dislocated from society at large for reasons personal and professional, Joe always gets the job done. But when he’s tasked with rescuing a senator’s missing daughter, the already-shaky foundations of Joe’s world start to crumble.

YWNRH has been reductively labelled the ‘arthouse Taken’. But it would be more accurate to describe it as a latter-day Taxi Driver, the spectre of Scorsese’s classic looming large over Joe and the grimy underworld he inhabits.

Rather than deconstruct the testosterone-fuelled geriaction thrillers of Neeson and his peers, Ramsay simply ignores the last decade of action cinema, presenting Joe as a morally dubious, remorselessly violent, irreparably broken antihero. Tormented by his past, Joe is plagued by disorientating and disturbing visions of the abuse inflicted by his father and the horrors he witnessed as a soldier.

None of this is hammered home, however. Ramsay trusts her audience to piece together Joe’s past as it unfolds. Directed with unwavering vision, YWNRH reaffirms Ramsay as one of our greatest living filmmakers. In one bravura sequence Joe’s assault on a town house plays out almost entirely over black-and-white security camera footage. In another sub-aquatic scene, she conjures pure beauty from Joe’s lowest ebb.

Bulked up and bearded, Phoenix has rarely been better, delivering the kind of traumatically internal performance only a man of his commitment could pull off. Clearly he’s found a kindred spirit in Ramsay. As well as a convincing hardcase capable of dismantling men twice his size, he brings soulful complexity to the film’s jet-black humour.

As you may gather, it’s not the most welcoming world to spend an hour and a half in, and there’s a case to be made that Scorsese covered the same ground 40 years ago. But for any film to invoke the spirit of Travis Bickle, and not suffer irredeemably, is quite the achievement.

Lynne Ramsay returns with a scuzzy, stripped-back thriller focused on the man, rather than the mission.