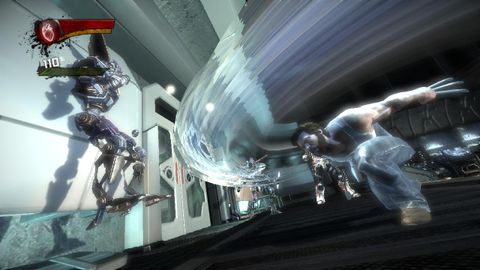 For the first five hours Wolverine is brilliant. There’s nothing particularly original or inspiring about it – it’s just loads of vicious, bloody, stupid fun. It craps all over recent travesties such as Iron Man, Watchmen and The Incredible Hulk and proves that film spin-offs can be decent if the developers put the effort in. But then it starts repeating itself. The same enemies, puzzles and locations are wheeled out time and time again, meaning the excitement quickly gives way to familiarity and boredom. But those first five hours almost make it worth it, for a range of reasons that we’re about to explain.

Making things die in this game is a ridiculous amount of fun. The thrill of being a super-fast, super-strong, virtually indestructible mutant with retractable, razor-sharp claws is captured perfectly by the slick, dynamic combat. The simple God of War-style combos aren’t anything we haven’t seen before – heavy attacks, light attacks, throws – but it’s the sheer speed and brutality of Logan’s moves that make the game so appealing. He literally tears through enemies, slicing off their arms and legs, cutting them in half, driving them into walls and impaling them on surrounding scenery.

But it’s the lunge ability that we love the most. Lock onto a nearby enemy (or not-so-nearby, that’s the beauty of this attack) and then fling yourself towards them. Then, depending on what combo you use, you’ll either slash at them with your claws or pick them up and toss them – either into other enemies or handily-placed skewers. A light attack will enable you to repeatedly slam your claws into their chest, while a heavy attack sees Logan leap into the air and slam them into the goon’s face in slow-motion as he pleads for mercy. Like we said; this game is terrifyingly brutal.

In fact, it’s even rated higher than the movie. And it makes the most of its adult rating at every single opportunity, especially during the mid-level cutscenes. Occasionally, an action you perform such as jumping over a bridge or lunging at an enemy) will then segway seamlessly into a cutscene.

They’re like quick-time events without the brainless button-bashing and some of them are hilariously violent. For example, in an early level Wolverine leaps onto a helicopter, pulls the pilot out and shoves his head into the spinning rotors, jumping off at the last second as the helicopter spirals to the ground and crashes. In another, he impales an enemy on the end of a gun emplacement then turns it on the rest of his buddies, Rambo-style. These bits are a pleasure to watch rather than intrusive and they’ll have you punching the air and whooping with delight. They could have been a bit more interactive though.