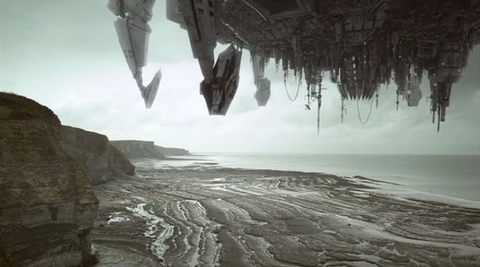 THE ONE WHERE Schoolboy Tom Clarke, who is a wizard, finds himself battling a spaceship full of aliens who've turned up to eat Earth’s magic.

VERDICT If you're expecting this to be some kind of spin-off from The Sarah Jane Adventures , you're both right and wrong. You're right because Wizards Vs Aliens has the same fun attitude to storytelling, a young and vibrant cast, and is every inch as breezy and colourful. But you'd be wrong because this is set in a very different universe to all things Doctor Who – with the biggest difference being that there's magic in it.

It's strange to think that Who 's managed to tell fantastical stories on our screens since 1963 with only the faintest whiff of magic here and there; science (however wibbly-wobbly) is deemed more important. Wizards Vs Aliens redresses the balance by making its young star, Tom (Scott Haran), an honest-to-god wizard with magical powers and everything. Unlike a certain Mr Potter, however, he's grown up fully aware of his skills.

Tom comes from a long line of wizards and, like most teenagers, is a bit grumpy about being told what to do by his dad; in his case, his dad's nagging him not to use his magic in case he gets found out. Naturally, also like most teenagers, Tom doesn't listen, and so you see him cheating at football and using magic to do his homework before the first episode's even finished. Tsk! What he needs is a kick up the bum to prove to him that his magic is a gift and needs to be used for a higher purpose... and what higher purpose can there be than saving the world from a bunch of aliens?

Which brings us to the Nekross, who arrive in a ship that looks suspiciously like Deep Space Nine . Their make-up is brilliant: you'd never guess that underneath Lexi's fir-cone-patterned face was Gwendoline Christie, aka Brienne from Game Of Thrones . They have hilarious tentacle-things attached to their heads that move around all the time like little Medusa snakes – one has an eye, and the other a mouth (we think it's a mouth, anyway; perhaps we'll get to find out in a later episode). Add to the fantastic make-up FX some delightful shouting and stomping around and you've got bad guys who should be equal parts amusing and evil, and they certainly don't pull their punches. At the start of episode one they drain the magic out of a little boy so he becomes a wizened old man, which is a strangely shocking way to open the series...

As for the human leads, Haran is likeable enough as Tom, although we suspect Percelle Ascott will be the kids' favourite as the geeky Benny, basically countering all of Tom's magical tomfoolery with arguments about science. He's the Scully to Tom's Mulder, if you will. Elsewhere, Annette Badland has a blast as Tom's gran – you probably recognise her from her role as a gassy Slitheen on Doctor Who , although there's not a fart in sight here.

While we have a few quibbles, such as a worry that the Nekross's plans to steal magic may become a little repetitive (they can't be thwarted every week, surely?), by and large Wizards Vs Aliens is off to a flying start. It's fun, it's fast-paced and it contains some rather lovely and unexpected moments, such as a car flying through space in a beautiful FX shot. That's one thing even Harry Potter never managed.

THE RULES OF MAGIC Wizards can only use three spells a day, getting recharged every morning at daybreak. As Russell T Davies admits in this SFX interview , this was decided so that that magic wouldn't be unlimited and thus win the day every episode... and to save money on FX!

BLESSED BE! The King of the Nekross is voiced with gusto by Brian Blessed, who has so much fun bellowing lines such as, “MAGIC! I MUST HAVE IT!!!!” that you wonder how many microphones he broke during the dubbing sessions.

TOILET HUMOUR There's a secret network of caves in Tom's house, with their entrance hidden in the downstairs loo. At least you don't have to flush yourself down the bog like you do in Harry Potter , though.

HE'S A VERY NAUGHTY BOY Tom uses magic to do his homework and to win at football. Kids, if you're reading, don't try this at home. Only cheats use magic to pass their exams. Bad Tom! It'll be interesting to see if he continues to do sneaky things like this, or if he learns his lesson.

BEST LINE
Tom: “What's the point of magic if you can't even have a laugh with it?”

New episodes of Wizards Versus Aliens air on CBBC every Monday and Tuesday at 5.15pm