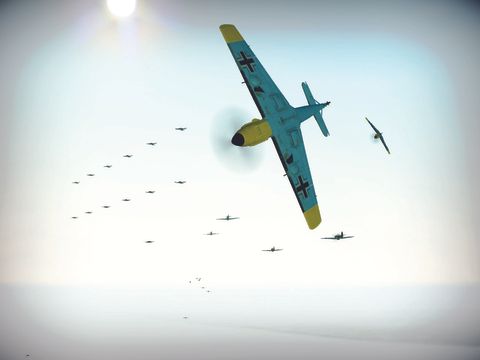 The console version of this WWII flight-not-quite-sim was blessed with an IL2-Sturmovik prefix, but the publishers clearly knew they’d be playing with fire if they waved that revered title around willy-nilly on the PC. Sturmovik is the first and last name in combat flight simulation. For a game as accessible to beginners as this to lay claim to that title... it’d be like a hamster wearing a dog mask and entering a dog show.

It’s just a different creature from Oleg Maddox’s sacrosanct sim series. While there’s a very serious simulation in here, WoP is primarily built around its Arcade mode. Think HAWX, but set in the ’40s and with propellers. It’s more about accurate machinegunning than being a hotshot pilot, and even then it’ll help you keep a bead on the bogies with its all-knowing radars, targeting assistance and option to sic your small squadron of expert allies onto them with a button press.

In Arcade mode, its console heritage announces itself as unashamedly as a Kanye West interruption. It’s lightweight, but only because it means to be – so it can drop you straight into, say, the Battle of Britain and make you the hero of the dogfighting day without getting its longjohns in a twist about physics.

Switch to Simulation mode, though, and WoP becomes an exhausting game of survival and deduction – no HUD beyond oft-obscured cockpit dials, no third-person camera, harshly limited ammo and fuel, the need to worry about radiator temperature... It’s bloody hard, and all but unplayable without a proper flightstick. Which is all well and good if you were born and bred on high-end sims, but it’s absolutist in its poles of arcade and hardcore.

It’s a huge and intimidating switch, making only the most token effort to help you step across the yawning chasm between forgiving fun and relentless cruelty. If you’re a casual planehead, don’t realistically expect to ever move out of Arcade mode.

There’s no shame in that, because it’s a grandiose thing in either mode, for the most part. The planes are perhaps a little too shiny and weightless, and their pilots frozen and expressionless, but the sheer number of them that can dot the sky simultaneously, replete with raggedy-winged damage modelling, really does the trick. Even more striking are the huge landscapes below you. WoP’s harrowingly beautiful besieged Stalingrad is awesomely three-dimensional, lending a sense of being in the middle of a raging war rather than just a compartmentalised dog fight.

A shame, then, that WoP doesn’t really go for it – while its mechanics are confidently simple and intuitive, the presentation it throws around the gung-ho dogfighting can be weirdly subdued. A soundtrack cranked right up to 11, a little more exaggeration to the ’splodes, a dash of Biggles-speak and it’d be the gloriously over-the-top tale of derring-do it sometimes threatens to be. It just needs to go for it.

There are other, more mechanical issues. The DRM that’s included, even when buying online, is hideous. A three-activation (i.e., installation) limit is imposed by our old friends at Starforce and you’re also required to connect to a proprietary patching/ads engine called Youplay while you dogfight. What utter nonsense.

WoP is an odd thing – so confident in many ways but flailing for purchase in others. Still, it’s effectively two games in one and, for the sim crowd, it’ll help to stave off the great hunger caused by the now three-year-plus wait for the real Sturmovik sequel, Battle of Britain.