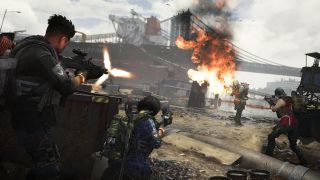 When The Division landed in 2016, it presented a version of New York never seen before, torn apart by the Green Poison disease. This beloved setting was abandoned in favour of Washington D.C. when The Division 2 rolled around, but fans swiftly rued the absence of the tightly woven New York City streets since it held such a special place in both player and developer hearts alike. Massive has recognised the importance and appeal of returning to where it all started and as a result, The Division 2: Warlords of New York is coming. Get ready to dive into a version of Manhattan never seen before in this world of post-apocalyptic America.

A fresh but familiar location

While you could venture into Times Square and famous districts like Hell's Kitchen in the first game, one iconic region was off limits; Lower Manhattan. This is where Warlords of New York takes place. There are four named zones; Battery Park, Financial District, Civic Centre, and Two Bridges, along with a brand new Base of Operations called Haven. There are a number of identifiable landmarks including Chinatown and Wall Street, along with the Manhattan and Brooklyn bridges.

The question is, of course, why are we back in New York after the action moved over to Washington D.C. for The Division 2? Those of you who played the first game will no doubt remember the first ever rogue Agent, Aaron Keener. Well, he's back and he's armed with a new strain of the virus and four immensely strong lieutenants to do his dirty work. The story in this expansion has you hunting down each of these lieutenants across four lengthy missions, followed by the search for Keener himself. There's also eight side missions and eight control points within Lower Manhattan, and of course, standard enemies to fight too. Keener isn't the only familiar face though – Faye Lau and Roy Benitez both return to aid you in your mission.

Yannick Banchereau, associate creative director on The Division franchise, explains that returning to New York is something Massive has been planning for a long time – it is, after all, a locale that's close to the studio's heart. "It's such an important location for everyone [at Massive]... That's where we [set] The Division. That's where a lot of the advances in the story happened. That’s where the epidemic started. That’s where the most important characters are," says Banchereau, who is quick to note that as happy as the studio was with its mission in the nation's capital, it's always a comfort to go back to the city where it all started for The Division. "We were very happy to go and explore Washington D.C., and, you know, try and have new areas, and new types of biomes, and environments. But I always knew that eventually we would want to go back to New York and explore it. But at the same time, we wanted to create a different New York."

Thanks to the devastating hurricane that has hit New York in the time between the first game and this expansion, this area feels significantly fresh to venture forth in. Aspects will feel familiar because at the end of the day, it is still New York, but hunting down Aaron Keener in these areas that have hardly been explored before means it retains that element of the unknown. While I only got to explore one of the four zones in the expansion, it does feel like the playable area is significantly smaller than what you'd hope for something meant to inject life into the game for another full year. Still, it's good to be back in NYC, and I can't wait to explore the city further once I can get my hands on the other areas.

The factions found in The Division 2 haven't made the trip back to the Big Apple, instead you'll be going up against both the Rikers and the Cleaners – familiar foes for any of you that played the first game in the series. That said, the two groups haven't been sat twiddling their thumbs in the downtime. Warlords of New York introduces "mutated" versions of the two Division 1 factions, each of which are equipped with improved tools, armour, and weapons.

One issue with the current gear grind in The Division 2 is that finding new loot becomes less exciting the more you play; after all, the chance of finding the perfect item with ideal attributes and talents is so slim. With Warlords of New York, Massive wants to "streamline" the process of getting relevant gear so that, at a glance, you can tell whether a new item will come in handy. Even if it's just a perk you want to extract from it at the recalibration station, it means every loot drop should – and does – pique your interest.

That isn't the only core change coming to The Division 2 with the arrival of this DLC. Massive understands that 'Skill builds' have also been notoriously underpowered throughout the last year of The Division 2 so, in an effort to increase build diversity, the way that skills work is being completely revamped. The specifics are yet to be disclosed, but the tier system is being redeveloped, and there's four brand new skills being introduced to spice up combat even further.

The four new toys to play with are as follows: the decoy, sticky bomb launcher, firebrand (fire-based variant of the sticky bomb launcher), and shock trap. Each of these skills is owned by the four lieutenants working to protect Keener. Complete all four missions – in any order you want, thanks to how everything scales – to unlock all the new skills and utilise them in your arsenal. You'll also get a live demonstration on how to properly utilise these weapons as the lieutenants will do their utmost to stop you from getting your hands on them to begin with.

If, like me, you reached World Tier 5 and Gear Score 500 in The Division 2 before dropping off to play something else – there's only so long I can engage with a monotonous grind for slightly better stats – then Warlords of New York is like a cheeky new game plus mode. Kiss goodbye to the non-stop purple and gold drops; green and blue items are your friend once more thanks to the level cap being raised from 30 to 40. This also means that you'll have to slowly acquire your ideal build again, but the rework means there's a strong chance you'll have to opt for something entirely new.

"Warlords of New York is [going to] give you a whole new progression experience," Banchereau explains. "You’re going to go from level 30 to level 40. You’re going to a new map. You’re going to experience new missions and story threads. And basically, you’re going to keep building on the character, and on the kind of connection you’ve developed with that piece of entertainment."

"I think it’s all of these adding up, and it should, hopefully, get people excited, you know? It’s the idea of jumping back in – I can take my character, and fly to New York, and start getting green items and blue items and purple items again, and go to level 31 or level 32. There’s something nice to that."

Since we're one year into the lifespan of The Division 2 at this point, Washington D.C. has been explored to death. The opportunity to return to New York is welcomed, whether you're a Division veteran eager to venture into more of the city the first game depicted so well, or you're a newcomer taking advantage of the new ability to create a character at level 30 in order to access Warlords of New York right away. You can bypass the base game content and jump into the fray with your friends, meaning this expansion is the ideal time to start playing again.

Like other live-service games, The Division 2 is embracing a seasonal structure in an attempt to keep players engaged and active for the foreseeable future. Each season will last for three months and have a "mini campaign with a narrative hook". There'll be a manhunt you can partake in to earn exclusive rewards, which includes new skills and mods, along with exotic gear and cosmetics. Global events will become a thing too, along with leaderboards to see how you stack up against friends online. Small additions, but things that will keep players engaged for longer; not to mention a premium battle pass system coming with extra rewards. Once you've completed Warlords of New York, you'll be able to explore both Washington D.C. and Lower Manhattan at your leisure, with a brand new legendary difficulty opening up for all missions across the entire experience.

Question is, when can you get your hands on The Division 2: Warlords of New York? The expansion is launching for all three platforms (PC/PS4/Xbox One) on March 3, just a week before the official one year anniversary of The Division 2. Whether it's worth the €30 price tag for existing players (or €60 for new players to pick up the Ultimate Edition with all year one content included) however is your prerogative. If you enjoyed the base game and want more of that replayable content with collectibles to find and a maze of streets to explore, Warlords of New York is a no-brainer. Will this expansion convert players who didn't particularly enjoy the game last year? Unfortunately not, because it is more of the same core experience, albeit with adjustments that make it all the more refined and polished. I know I'll be grinding out the game once again when March 3 hits, but how long it'll keep me hooked for remains to be seen.