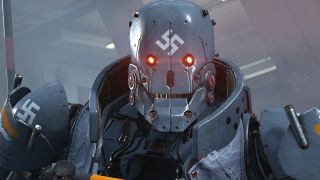 Wolfenstein 2: The New Colossus is a game that shows what America would look like under Nazi conquest and ideology. It's not a new concept for alternate reality fiction (author Philip K. Dick laid out a similar vision way back in 1962 with The Man in the High Castle, now an Amazon Prime Video series) but I don't think it was ever supposed to feel quite this relevant, either.

"Well, it's weird. It is pretty weird," Wolfenstein 2 creative director Jens Matthies admits when I ask him about how it feels to work on the game as neo-Nazis and associated groups emerge from obscurity in America, pushing Hitler's genocidal ideals as worthy of consideration in mainstream politics. "It's not really something I would have expected, that's for sure."

Playing through a demo of Wolfenstein 2 at QuakeCon, I heard an upstanding US citizen enthuse about ethnonationalism to a Wehrmacht kommandant, and I read through an old article about a newspaper editor who was executed for not toeing the Nazi administration line. Still, Matthies says it's "not necessarily a commentary on current events" and players are free to shoot-and-stab their way through the game without ever stopping to analyze the underlying political message.

"But on the other hand I think those themes are timeless," Matthies continues after a quiet moment. "So I think there's always gonna be relevance to it. If you make fiction that involves Nazi ideology, it's always interesting because everyone is susceptible to it [editor's note: not the people being threatened with genocide, obviously, but the ideology's intended audience]. Everyone is susceptible to be enchanted by some sort of apocalyptic movement or whatever.

"That's the thing with Nazi Germany, is that the vast majority of the population got on board with this. I mean, Hitler won democratically, right? And I'm sure there was some degree of resistance within the German people, but the vast majority did not resist. And I think that means something. I think that means that this is something you as an individual have to be mindful of, not to sort of get wrapped up in it."

If that's a message some players take away from their time blasting through the Nazi occupation of the United States, the whole country will be better off for it. For more on killing Nazis, read our hands-on Wolfenstein 2 preview.