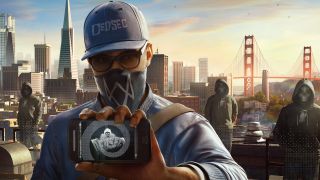 I went into my hands-on demo of Watch Dogs 2 with a mission most mundane: recreate my normal, everyday life. Even with all of Marcus Holloway's hacking superpowers at my fingertips - like siphoning someone's bank account from the bird's-eye view of a drone, or forcing passing cars to make hard turns at my whim - all I really wanted to do was walk down the bayside Embarcadero as if I was on my way to work. But after nearly two hours of pure exploration, I realized: despite a myriad of instantly recognizable landmarks, my fantasy of simulating my personal SF escapades wouldn't quite be possible in Watch Dogs 2. And while that initially came as a disappointment, I've since realized that my dream would've been a nightmare for developer and player alike. Even if they're built to feel as authentic as possible, no open-world game should be burdened with an aim for true accuracy.

Watch Dogs 2 isn't the first game to present players with an open-world simulacrum of a real-world city. The original Watch Dogs crafted a condensed, near-future version of Chicago. Another Ubisoft joint, Assassin's Creed: Syndicate, replicates old-timey London in a way that seems almost alien to the present-day denizen. Infamous: Second Son is set in a virtual version of Seattle that takes some hefty liberties with its layout of recognizable real-world spots. Having never resided in any of those places myself, I didn't yet know the strange sensations that come with exploring an open-world imitation of your usual surroundings. But after living in San Francisco for over five years and following Watch Dogs 2 for nearly five months, I've felt the quasi-deja vu of wandering an open-world city that seems to abridge reality. There are bits and pieces of scenery that feel like perfect reproductions, but the stretches in between have been reworked, replaced, or removed entirely.

Though I couldn't completely lose myself to the illusion of this truncated San Francisco, I often marveled at the reminiscence that washed over me when idling around particular landmarks. Watch Dogs 2 cleverly dresses up some of its sidequest distractions as mobile apps, encouraging players to see the sights by taking in-game selfies near familiar tourist attractions or time-honored urban oddities. Japantown is one of my favorite hangout spots in the real SF, and visiting the iconic Peace Pagoda in Watch Dogs 2 put a smile on my face (even if the nearby architecture looks nothing like reality). I didn't have to climb a staggering number of stamina-draining stairs to reach it, but the in-game Coit Tower looks just like the genuine article (complete with its gorgeous view of the city). And though licensing red tape prevents some landmarks from bearing their actual monikers (like Nudle Park baseball stadium in place of the actual AT&T Park), I took joy in spotting the Waterfront Cafe just past the Ferry Building - the exact same structures I use to judge my ETA during my commute to the office.

But then, my actual office building is nowhere to be found. The map in Watch Dogs 2 is an impressive mirage: glancing at its versions of San Francisco, Marin County, and Oakland gave me flashbacks to all the times I've consulted Google Maps while exploring the city, even though the game space is a mere fraction of SF's actual size. As I continue speeding down the Embarcadero in a stolen vehicle (in-game, mind you), the area I know by heart suddenly morphs into Fisherman's Wharf, skipping miles of blocks I was expecting to see. The neighborhood I live in is included in Watch Dogs 2's world, but it's so shrunken down that it's impossible to pinpoint the spot where my house should be. And in hindsight, it was silly of me to want to explore the street where I live in a video game. I was so preoccupied with seeing my world recreated into a lifelike virtual playground, I didn't stop to think what that would actually mean. Despite having played through plenty of open-world adventures, the circumstances of my life made it so that only Watch Dogs 2 could lead me to this epiphany.

There will never be an open-world game that perfectly replicates an actual city, and there never should be. Driving past a digital recreation of my home would've been a thrill to me (and possibly my neighbors), but for the other 99.99% of Watch Dogs 2 players, it would be meaningless. No matter how much money, labor, and disc space could go towards a AAA open-world game, it makes no sense to litter its world with ordinary buildings for the sake of 1:1 accuracy. As some No Man's Sky players will attest, more space to explore does not equal more satisfaction or excitement - if anything, it dilutes the more thrilling moments with long stretches of mundanity. If you ever thought an open world felt bloated before, just imagine driving through countless residential areas just to get to your next mission. People like to joke about the fact that we never see Jack Bauer take a single bathroom break during the real-time events of 24, but I'm certain that a shot of Jack having a meditation after his Venti columbian roast would add nothing to the show's overall entertainment. Such a slavish adherence to real-world digestive tracts doesn't benefit the experience, just as a 3D-rendered model of my house would have no bearing on Watch Dogs 2's story or structure.

Maybe this realization about the open-world genre seems incredibly obvious to you, and if so, my compliments. But I reckon that anyone who hears that a game aims to recreate their city would be swept up by the same giddy curiosity, a fascination with the thought of your daily existence overlapping with a product that was made to entertain the masses. If you've ever delighted in spotting your old neighborhood or some place you used to work in a movie shot on location, or hunted for your name in the ridiculously long contributor credits of a Kickstarter game, then you know what I mean. And I can't be the only one who played Grand Theft Auto 3 way back when and dreamed of the day technology could take open-world games to their logical conclusion: an impeccably accurate, fully explorable, maybe even destructible recreation of the entire planet Earth. But we already have the better version of that utterly impossible pipedream.

Watch Dogs 2 takes the right approach: mimicking the feeling of a city without needing every building in its proper place. All the big landmarks are there, along with little descriptions explaining their significance to the city's history and culture. The street art evokes the same creative vibe as the stunning graffiti you can spot throughout the City by the Bay. NPCs spout snippets of conversations that I could swear I overheard just last week: Silicon Valley hotshots blathering about the 'struggles' of their startup, or people energetically gossiping about whatever their friends just posted on social media. Grand Theft Auto 5's Los Santos lampoons Los Angeles but still imparts a clear effort to capture the city's distinct flavor and landscape; Watch Dogs 2 treats San Francisco with a similar balance of reverence and playful parody.

The geography of Watch Dogs 2's San Francisco is great without being perfect, and now that I've thought more about it, that kind of comparable-but-not-cloned landscape is just fine by me. I think of a visit to any video game city to be something like a Wikipedia page: consuming one won't ever make you an expert, but you'll at least have enough context to knowledgeably join the conversation. And though I can't gleefully crash a sports car into a recreation of my garage, it's still mesmerizing to be able to run around the Transamerica Pyramid where I sometimes grab my lunch, or hack a camera outside the virtual version of the very Ubisoft offices where I'm playing this demo. So what if this open-world doesn't get every last detail exactly right - accuracy doesn't determine your enjoyment of the bigger picture.