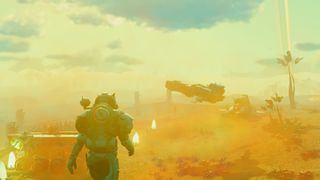 There are a few things I thought players would request for the next major update to No Man's Sky, but I really didn't think that the ability to die in space would be one of the most requested... But according to creator Sean Murray, being able to see what happens when you die in space, first hand, is a "surprisingly common" request from fans.

"There are very common things that people want that just wouldn't work for our game," explains Murray in an interview with GamesRadar's own Josh West. "People keep asking for gas giants. They want gas giants so that they can fly down and just instantly die. It's a bunch of work that may not have the biggest payoff for people, ultimately, but also I understand that it is role-playing, in a sense. But we also have to factor in new players and find a balance there – people don't like to just die inexplicably, if they don't know the reason behind it."

"Another common one that people ask for – and this is surprisingly common – is to be able to is to be able to get out in space and just die. Players want to be able to open their ship up and just float in space and die. It's uber common; maybe they want to float for a bit first first, but then they will still die. I get that it factors into the role-playing aspect to the game, of 'well, why can't I do that? I want to be more immersed in this; I want to know what it would feel like in VR; I want to experience this.'"

"But obviously, there are reasons why we can't add that in. The average player, for example, would then accidentally get out of their ship and die, and then they would be asking us why we ever put it in there in the first place!"

"But there's a lot of stuff like that; there are game design reasons behind it. The risk is, what it would add for one person it could take away for way more. There's a balancing act."

So there you go folks. No Man's Sky Beyond will not be the first game, in VR or otherwise, to allow you to experience what it's like to die in space. Phew!