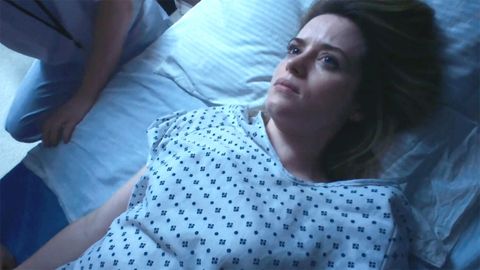 A short, sharp shock of a thriller that demonstrates the versatility and range of both Soderbergh and Foy.

Following his temporary retirement, Steven Soderbergh is making up for lost time, knocking up this inventive thriller as a chaser to his heist caper comeback Logan Lucky. Filmed in secret (on an iPhone!), with Soderbergh also cinematographer and editor, Unsane benefits from being seen cold, giving it a better chance to catch you unaware. Stripped of glossy mainstream trappings, it feels experimental, urgent, and made for immediate consumption.

The plot centres on analyst Sawyer Valentini (Claire Foy), who’s just relocated to a new city. It soon becomes apparent that moving cross-country is one of many changes she has made in her life following a stalking ordeal. Stressed and struggling to cope, she seeks advice at a local facility, where she unwittingly commits herself and falls foul of an unnerving catch-22: the louder you shout about being sane, the less convincing it seems.

Finding herself facing Kafkaesque levels of maddening bureaucracy, Sawyer does her best to endure the experience while working out an escape plan. Even she starts to question her own mind, however, when she sees the man she believes to be her former stalker (The Blair Witch Project’s Joshua Leonard) working at the institution. Foy’s fractured, frazzled turn anchors the film. It’s a performance that feels truthful, even when Sawyer’s not sure she believes herself.

Most of the folks she meets on the inside are necessarily unreadable, but a handful – such as Juno Temple’s fellow inmate – feel like a bundle of tics, obstacles for Sawyer rather than fleshed-out individuals. But maybe that’s the point, given that Unsane is such a subjective experience. Soderbergh’s decision to shoot on a handheld device reaps benefits beyond its intrigue value as a nifty selling point; the lensing thickens the noxious sense of claustrophobia, and has you gasping the same stale air as Sawyer.

The unvarnished finish tinges the film with a fly-on-the-wall quality. Over the course of the brisk running time, we learn more about Sawyer’s backstory via flashbacks (including one cheeky atmosphere-puncturing cameo from a Soderbergh regular), as Unsane prepares to show its hand.

The film works best in the first half, when it wobbles on a teetering tightrope of ambiguity, before it slips into a more straightforward genre mode. If the early sections of Unsane threaten to go full arthouse, Soderbergh always keeps one eye on the multiplex crowd. It’s a taut, tense little puzzle. Moreover, its hot-button themes and brain-noodling ‘what if’ premise are sure to inspire plenty of post-cinema chatter. Not bad for a pared-back thriller shot on a smartphone.

Unsane review: "Experimental, urgent, and made for immediate consumption"

A short, sharp shock of a thriller that demonstrates the versatility and range of both Soderbergh and Foy.