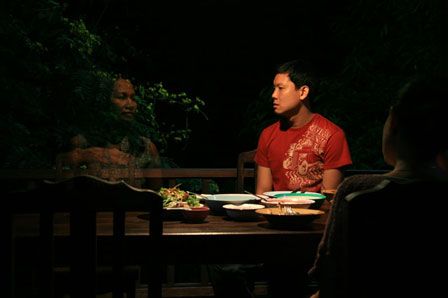 The Thai auteur’s Palme d’Or-winning latest deserves better. Combining the trippy mystique of his earlier films (Tropical Malady, Syndromes And A Century) with a fresh near-linear approach,this is a slow-burn fable of animism, reincarnation and lewd catfish.

The lengthy opening sets the pace, as an ox roams rural north-east Thailand. We meet Uncle Boonmee (Thanapat Saisaymar),a man close to death who travels to the countryside to revisit his past lives, one of which might’ve been said ox.

One Cannes critic dubbed the film “Uncle Bonghit”... But ‘Joe’ (Apichatpong’s self-appointed nickname) plays the weirdness matter-of-factly so as to stress mundanity’s riches.

As Boonmee is tenderly cared for, the screen glows with warmth. Luminous cinematography makes verdant nature shimmer and deadpan humour grounds the delirium.

Interpretations are up for grabs. Apichatpong calls Boonmee a homage to old Thai cinema, explaining the simian suits.

It could be a serene study of losses, political and personal, skating from death to the effects of state oppression. Its ‘setting’ could be a dream state between life and after-life.

It isn’t perfect: the climax does drag, though where else will you see a catfish orally pleasuring a princess?