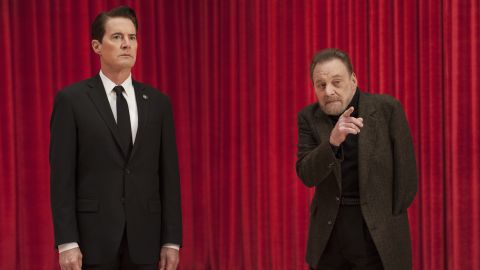 Weird tonal shifts aside, this is a solid episode that carves an interesting path for Cooper.

Having recently emerged from the Black Lodge, a dazed Dale Cooper (Kyle MacLachlan) finds himself in a casino winning big on the slot machines. A ghostly guide linked to the Black Lodge tells him which one-armed bandits will pay out, earning him over $20,000. Enough that the casino manager (Brett Gelman) invites him to his office to personally hand over the winnings, as well as offering him a limo ride home. Cooper ends up at Dougie’s house where his ‘wife’ Janey-E (Naomi Watts) yells at him for being missing for three days without calling. But when she sees the sack of money she calms down, relieved that they’ll be able to pay someone back. This may explain the assassination attempt in the previous episode. Cooper is still in a stupor, only able to repeat what other people say to him, presumably a result of his premature release from the Lodge. But despite a dramatic change of appearance—Dougie was wider around the waist and had an unruly mane of hair—Janey-E seems convinced Cooper is her dear husband.

In Philadelphia, Gordon Cole (David Lynch) meets with Denise Bryson (David Duchovny), who’s left the DEA and risen to become the FBI’s Chief of Staff. Their conversation is one of the highlights of the episode, particularly Cole’s assertion that Bryson’s transphobic colleagues should “fix their hearts or die.” The perfect response to any bigot. Cole travels to South Dakota with Tamara Preston (Chrysta Bell) and Albert Rosenfield (Miguel Ferrer) to meet with Cooper, who is in fact the evil, long-haired doppelgänger we last saw puking up creamed corn in his car. They arrive at the prison where ‘Cooper’ is being held, and Cole senses immediately that this monotone, unsettling individual isn’t his old friend. “Blue rose?” Albert asks later, referring to a symbol introduced in the movie Fire Walk With Me that relates to cases involving the spirits of the Black Lodge and other paranormal goings on. “It doesn’t get any bluer.” replies Cole ominously. Things are getting serious, and they decide that they need the help of a certain woman to deal with the situation, but we don’t find out who.

Back in Nevada, Coop’s new home life briefly transforms the episode into a light-hearted sitcom. As Dave Brubeck’s chirpy Take Five plays—a rare musical moment in this eerily quiet series—we watch him bumble around the house, failing to understand how to put on a tie and eat breakfast. Sonny Boy, the young son of Janey-E and Dougie, finds this highly amusing, but his wife seems disturbed by his behaviour. Tonally this sequence feels wildly out of place and is perhaps a little too comical, but we return to familiar territory when Cooper has a vision of MIKE in the Red Room, who tells him that he’s been “tricked” into leaving the Lodge, and that either he or his double must die. Could this be leading to a final battle for the ownership of Cooper’s body?

In Twin Peaks we finally meet the elusive Sheriff Truman, although it’s not the one we were expecting. Michael Ontkean declined to return to the show at the last minute, and so his brother Frank Truman (Robert Forster) has replaced him. It would have been nice to see Ontkean back, but Forster is a fine replacement. Receptionist Lucy (Kimmy Robertson) seems to have a fundamental misunderstanding of how mobile phones work, and when she’s talking to Truman on her desk phone and sees him emerge through the front door, she almost faints. But the biggest surprise in this scene is that Bobby Briggs (Dana Ashbrook)—the drug-dealing tearaway who was once a suspect in Laura Palmer’s murder—is now a deputy at the Sheriff’s Department. He appears to have cleaned up his act, and breaks down in tears when he sees the famous prom photo of Laura recently unearthed from an evidence box. A lot has happened in his life over the past 25 years, including the death of his father, Garland Briggs, and the cocky bravado that used to define the character has faded away with age. Of all the reunions with the original cast so far, I found this the most emotional.

One of the strangest scenes in this episode comes courtesy of a new cast member. Wally (Michael Cera) is the son of Andy and Lucy, and comes to “pay his respects” to Sheriff Truman. He dresses like Marlon Brando in The Wild One and speaks in a manner that seems, on some level, to be an impression of the legendary actor. But it’s hard to tell. This is Twin Peaks at its most idiosyncratic, and I can’t quite put my finger on whether it’s amazing or terrible. But that inscrutable quality is part of the show’s magic, and I’m glad to see it carry over from the original show. I hope we see more of Wally, although it’s suggested that he spends his life on the road and rarely visits home. I guess it makes sense that Andy and Lucy would have such a peculiar child, considering their own particular, uh, quirks. And if you’re wondering about the Marlon Brando obsession, it’s because Wally shares a birthday with him.

Another wild, unpredictable episode, adding to an already deep pool of questions. But in these early episodes I wouldn’t expect anything less. Cooper’s adventures in Nevada as ‘Dougie’ are wonderfully weird, but the sooner he snaps out of his fugue the better. And now that the FBI are involved, and Cole has declared this one of his blue rose cases, the stakes are going to get a lot higher in the next few episodes. Bobby’s mention of Cooper being the last person to see his father alive before he died in a fire was also interesting. Did evil Cooper kill the Major? He had a direct connection to the White Lodge, which would be likely a threat to someone from its evil opposite. Expect some shock revelations in the coming weeks.

Weird tonal shifts aside, this is a solid episode that carves an interesting path for Cooper.