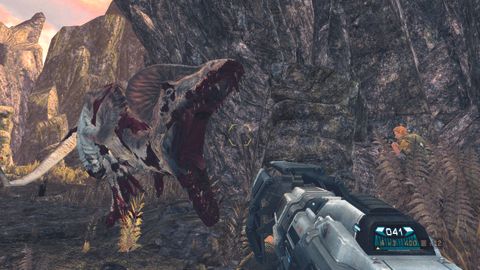 Our new Turok, unlike his forerunners, is not a dinosaur hunter (which is somewhat of a shame, as he would surely prove very able in the role). Instead, he’s an elite commando with a few skeletons in his closet. These skeletons were placed there by a man named Kane, a war criminal who once taught our boy Turok everything he knew. As Turok, your mission is to roll up on the desolate planet that Kane calls his home and bring your former mentor to task, a mission that is complicated by 1) your ship being shot down on entry and the majority of your crew killed; and 2) the planet being populated with Kane’s personal army, which stands at around three times the population of India.

So this is the big difference; your enemies are now distinctly human-shaped. While this might come as a disappointment to long-term Turok fans, we can assure you that along the way, you’ll be having your fair share of encounters with T-Rex’s, Utahraptors and other beasts with teeth as long as their names.

The war you wage against Kane’s troops takes place across the backdrop of a lost world. Prehistoric beasts of all shapes and sizes roam the land, politically neutral to the fight unfolding around them. Singularly, the majority of the dinosaurs will prove no match for our hero. While his arrows (and, to an extent, his guns) will prove largely ineffective against an approaching lizard-beast, his trusty knife proves more than an equaliser.

Turok can take down anything up to a medium-sized herbivore with a single slash of his knife. When an appropriate moment to strike occurs, an on-screen cue appears. A prompt response will unleash a brutal cut-away shot of Turok knifing up the dino good and proper. Mis-time your attack, and the dino will move in for the kill, activating a quick timed event. Failure to escape will result in a rapid, horrible death, but success will allow you the strength to push its snout out of the way, giving you a split-second to make your escape and regroup. Slaying dinosaurs with a single button press might not sound absorbing, but there’s a certain strategic thrill that comes with successfully strafing around a snarling dinosaur and moving in for the kill, particularly in levels where space is at a premium.