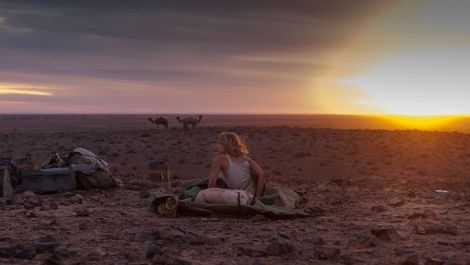 In 1977, Robyn Davidson attempted the insane: trekking 1,700 miles across the Australian Outback with just four camels and a dog for company. With Davidson turning her nine-month odyssey into a bestselling book, Tracks is now brought to the big screen. Under John Curran’s ( The Painted Veil , We Don’t Live Here Anymore ) direction, Mia Wasikowska plays this intrepid lady – a case of Alice In Wonderland in Alice Springs, you might say…

Anchored by a voiceover, we begin with Davidson’s prep: saving her cents, working for a foul camel rancher and facing sexism from just about anyone she encounters. Craving solitude, the only way she can fund her expedition is by petitioning National Geographic . The magazine agrees to bankroll the journey on one condition – that American photographer Rick Smolan (Adam Driver) occasionally joins her.

It’s soon clear that the spiky Davidson has little interest in sharing her desert exploits with the chatty snapper, though their occasional get-togethers give Tracks some much-needed fuel. While it’s not quite Cast Away or All Is Lost , Wasikowska still has to hold the screen alone for much of the time (or at least alongside her animal accomplices), something she does with her usual quiet grace.

Cinematographer Mandy Walker shoots the widescreen landscapes with an almost hallucinogenic beauty – echoing Davidson’s own increasing dizziness (in one scene she meets a hyperactive biker – a moment that deliberately feels like a mirage). The trouble with Tracks is that it suffers from a necessary monotony – a consequence of Davidson going walkabout across miles of endless sand dunes.

There are moving moments (especially if you’re a canine lover) but Davidson’s unwillingness to open up never makes her the most amenable Queen of the Desert. The result, emotionally speaking, leaves you a bit parched.

Right down to the sunburn and chapped lips, Tracks is an authentic desert drama. A little more psychological insight wouldn’t have gone amiss, though.