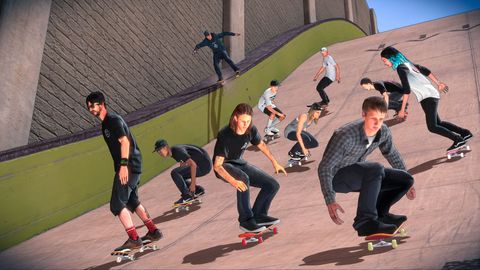 Tony Hawk's Pro Skater 5 exists to exploit any nostalgia you might have for the earlier games, offering an insulting dearth of worthwhile content in exchange for your money.

Playing Tony Hawk's Pro Skater 5 just makes me sad. Sad for anyone who bought the game, hopeful that it could recapture the series' former glory instead of continuing to drive it so far into the ground that it's practically at the Earth's core. Sad that the first four THPS installments, which are timeless, will probably never be preserved and sold through digital distribution due to copyright bureaucracy. The fact that this game exists in the state it's in simply bums me out.

THPS5 looks familiar, but you know something is definitely off about it. The basic framework is the same as its predecessors: you skate around sizable levels, comboing tricks and completing a variety of missions. Perhaps you're just thrown off by the half-baked cel-shading effects on the skaters, you think to yourself; anyone would be taken aback by dead-eyed models who appear to be refugees from the previous console generation. Maybe you're getting bad vibes from the inexplicable addition to the unadjustable control scheme, which lets you push forward with the right trigger and slow to a stop with the left trigger as if your skater was a bipedal car (thankfully, movement with the D-Pad still functions just fine). There's also the new slam move, a downward plunge which feels unnecessary at best and will often ruin your combos at worst. But no, the letdowns are only just beginning. Once you start to play in earnest, you'll discover the lead paint in this bootleg toy: crippling online connectivity.

Every time you enter a level, you're actually joining an online server populated by other players. It's a clever idea, meant to make you feel like you're part of a vibrant community at the local skate park, giving you an audience that might appreciate your skills. But THPS5 executes this idea in an inherently flawed way, structuring the game so that players have no incentive to band together and bond. Levels are stuck in a constant state of barren lifelessness, because whenever you want to actually attempt a mission, you're whisked away into a separate, instanced server.

Skaters phase in and out of existence like lost souls in purgatory, and the likelihood that you'll have any meaningful interaction with other players is precisely zero. You can attempt to challenge others to a variety of modes, with the egregious omission of classic modes like HORSE and Graffiti. And because you're constantly flip-flopping between servers while you're just trying to play the game, you'll find yourself positively inundated with load screens. It's not like there's a hub server and a single server for everything else, either; every single mission adds another sputtering load screen to the enjoyment-obliterating tally. Oh, and you'll love this: there's no local multiplayer whatsoever.

For no rhyme or reason whatsoever, some levels offer power-ups to add to the 'fun' of regular skating. There's a sliver of enjoyment to be found in the surprising absurdity of suddenly turning giant or being able to double-jump, but these superpowers feel completely out of place for the series. I'll concede that there is one genuinely cool power-up, which lets you propel yourself forward during manuals by blasting cones of cold from your hands, Iceman style.

All those load screens come with an additional annoyance: they cause the current song to abruptly end and skip to the next one, which has all the appeal of a road trip partner who can't stop fiddling with the radio. The song choices themselves are unremarkable, which is a shame in a series known for varied and eclectic tracklists full of interesting picks from punk rock to rap. As with Tony Hawk's Pro Skater HD, you can't customize the playlist, which you'll desperately wish for when one of the screechier songs cues up.

The levels themselves, along with the missions they contain, are joyless. All eight of the included levels feel empty and disjointed, as if objects were placed around a blank space haphazardly and slapped with generic themes like 'beach' or 'outer space'. Unlike the earlier games' multifaceted layouts full of trick-chaining possibilities, THPS5's sterile stages seem to be offering one, maybe two intended tricklines at any given time. Create-A-Park is back, giving you the option to plop down halfpipes and rails atop set templates. But no matter what kind of kooky level you or anyone else creates and uploads to the desolate selection found online, nothing can infuse THPS5 with the sense of fast, fluid freedom captured by the series' third and fourth iterations.

Meanwhile, the missions are effectively the same in every level, with the classic two-minute score run being the only mildly enjoyable objective to choose from. Other points-based tasks will often deprive you of crucial moves like manuals and reverts in a futile attempt to make things more interesting. The rest are inane chores, like knocking giant beach balls out of a pool or shooing pigeons off a railing; aceing these activities only leads to more misery when you unlock the 'PRO' missions, which are the antithesis of fun. In previous Hawk games, the sting of difficult mission objectives was lessened by the fact that you could retry it instantaneously. In THPS5, starting over takes at least seven seconds: you're forced to wait through two lovely countdown timers, and the Retry command is placed as the fourth option down on the pause menu. There's no way to successfully complete a mission early even after you've met your objective, and the static map screen offers nothing in the way of guidance.

If there's any redeeming quality to be found in THPS5, it's the skaters themselves. Alongside the Birdman himself and skateboarding mainstays like Andrew Reynolds and Chris Cole, there's a nice selection of young up-and-comers who could very well become your new favorites. The inclusion of Lil Wayne is nonsensical but appreciated, and you'll even find some secret cameos by the cartoony likes of Octodad and Graham from the new King's Quest. Unfortunately, everyone shares the same Special moves, making it so that the character choices feel homogenous.

I didn't even encounter the worst bugs that Tony Hawk's Pro Skater 5 has to offer, with bodies ragdolling for no reason and skaters plummeting through the level geometry. It almost makes me feel left out: instead of glitches that could at least make me laugh, all I got were stuttery camera shakes, constant frame drops, and seemingly glitched railings that would suddenly pop me out of a grind and terminate my combos for no reason.

If Tony Hawk's Pro Skater 5 were a budget game, I'd have a hard time recommending it to anyone. At full retail price, it's a disgrace. Labeling this as the fifth entry in the series has effectively backfired: it's a constant reminder of how much greater the originals were, and how much you'd rather be playing them instead.

Tony Hawk's Pro Skater 5 exists to exploit any nostalgia you might have for the earlier games, offering an insulting dearth of worthwhile content in exchange for your money.