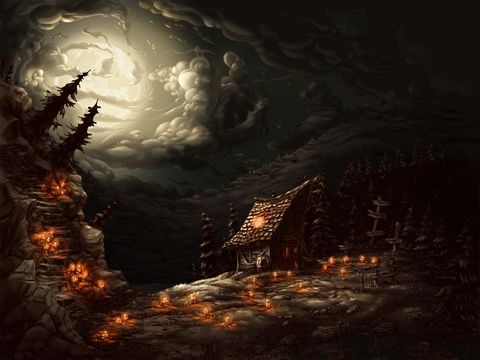 The character you play in The Whispered World is called Sadwick, a young clown in a travelling circus. His name is apt, because he’s constantly glum and morose, possibly in an attempt to personify the mumbling teen stereotype we all loathe so well. Curiously, he talks an awful lot as well, considering he’s meant to be sullen and broody.

In fact, everyone in Daedalic’s point-and-click adventure talk a lot. A hell of a lot. Far too much, in fact. The worst thing about this is that almost every single one has a repellent, odious voice, none more so than Sadwick himself. Being as he’s the fellow you’ll be listening to throughout the game, it’s not long before you’re literally wincing every time you hear him describe a bit of wood or a stone or something. Nothing can prepare you for the horrors that await you if you choose not to mute the voice audio.

Sadwick’s painfully vocalised quest is to save the world, the twist being that he’s the one that’s apparently destined to destroy it. On his journey, he’ll be helped by his pet caterpillar Spot, a thankfully mute sidekick, who gains different abilities as the adventure progresses, all of which can be used to solve puzzles.

The world Sadwick and Spot inhabit is gorgeous and is easily the best thing about the game. The backgrounds are beautiful and the cutscenes are exquisite, but there’s a slight let down when it comes to the actual animation, which is flat and rather disappointing.

Puzzles-wise, things are pretty much standard European adventure fare, with relatively easy progression occasionally halted by a randomly oblique conundrum. It’s all good enough to satisfy adventure fanatics, but nothing could possibly disguise or make up for the sheer torture of the voice-acting. It totally destroys the game and makes it almost impossible to glean any enjoyment from it, often because you’re repeatedly clicking through the ridiculously over-extensive dialogue.

Few adventures make you wary of talking to people, but The Whispered World makes you fearful of chatter, to the point where muting the character’s voices becomes the only way to have fun.

The underlying adventure beneath this terrible audio work is solid and worthwhile, with huge ticks in the win column for the graphics. Developers should note of what can be achieved in this area, but lessons should be learned about the importance of making your lead character actually enjoyable to listen to, for that is The Whispered World’s ultimate, massive undoing.