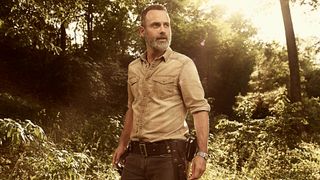 Talking to The Hollywood Reporter, Scott M. Gimple, former showrunner on The Walking Dead and now chief content officer for the property, explains: “There is more story to tell and we’ll be telling it.”

Quite how that will go down remains to be seen. Details are few and far between, though “the story of Rick will go on” as AMC is “working on three [movies] but there’s flexibility in that,” according to Gimple. These are proper movies too, slated to be around two hours with a full feature-length budget. In fact, it’s going to be a “large, big scope movie that will feel like a major motion picture.”

But The Walking Dead movies are just the start. “There is a multiple-year plan that could include additional series, digital content and specials,” outlines AMC programming president David Madden. Right now, the ideas are numerous and vague: “We're going to dig into the past and see old characters. We're going to introduce new characters and new situations,” says Gimple.

For now, however, all eyes are on Andrew Lincoln – who stepped away from the show to spend time with his family – and how he’s going to continue as Rick Grimes for a series of The Walking Dead movies. We may still have some time to wait, but Lincoln is on board, that much we’re certain of as Gimple confirms, “There were story ideas brewing that, as the years went on, seemed very compatible with continuing to tell the Rick story in another format that would allow him time with his family”

Happy with that or is this the point where you’re done and dusted with The Walking Dead? Sound off down below!