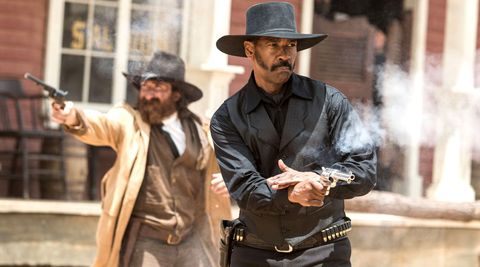 Not quite magnificent but certainly Fuqua’s best since Training Day and a rare remake that actually delivers. Yee-haw!

Remaking John Sturges’ crowdpleaser – a western beloved by even those normally left saddle sore by the genre – might be considered sacrilege… except that the hallowed 1960 picture is itself a remake. Sturges transposed Akira Kurosawa’s 1954 masterpiece Seven Samurai from Japan to Mexico, with a septet of sharpshooters rather than ronin now hired to protect a peasant village from rampaging bandits.

Not that such an argument would stretch far had director Antoine Fuqua and writers Richard Wenk and Nic Pizzolatto produced something deserving of a title like The Modest Seven. Fuqua would have got it with both barrels regardless of the true backstory – or, indeed, the fact Sturges’ film, which birthed three sequels and a TV show, has already been reimagined as a space opera (Battle Beyond the Stars ), an Italian sword-and-sandal epic (The Seven Magnificent Gladiators), and a Pixar animation (A Bug’s Life).

Thankfully, this version is locked and loaded. Set in and around frontier town Rose Creek in 1879, it opens with Peter Saarsgard’s industrialist Bartholomew Bogue making an aggressive offer (literally – he torches the town’s church) for the residents’ land. In a rush to get at the gold, he swears to be back in three weeks, and they’d better be gone. What choice is there given Bogue has the sheriff paid off and a posse of squinty-eyed, itchy-fingered men in his employ?

Washington is badass. Teaming with Fuqua for a third time, after Training Day and The Equalizer, he plays, essentially, the part occupied by Yul Brynner in Sturges’ movie and Takashi Shimura in Kurosawa’s original – a daunting prospect, but no problem when you possess Washington’s experience, authority and cache of cool.

From the moment Washington rides in, backlit by the blazing sun and dressed all in black upon a midnight steed, he owns the film. “I seek righteousness but I’ll take revenge,” Chisolm growls upon hearing the name Bogue; in one of several story tweaks, it’s clear there’s a personal backstory here.

Chisolm’s gang includes an Irishman, a Mexican, a Native American and a Korean as Fuqua both addresses Hollywood’s diversity issue and reminds Donald Trump that America was built upon immigrant spirit. Each character is fleshed out, morphing from merc to saviour, with the cast, like forebears Brynner, McQueen, Bronson et al., being a pleasure to hang with.

“You speak Comanche?” Harvest asks Chisolm. “You speak white man’s English?” comes the response. This is a western with political intent, though the brutal finale is open to interpretation – a celebration of the Second Amendment as townsfolk protect their homes, or an unblinking stare at the terrible violence that befalls the right to bear arms?

A startlingly barbarous set-piece, this climactic shootout recalls Peckinpah in the intensity of its violence. Don’t be fooled by the 12A certificate. This hurts, with guns, knives, arrows, cannons, dynamite and machine guns ratcheting up a kill count to make Rambo weep, while impact is maximised by having damn-near every corpse plummet off a roof. After a summer of mediocre blockbusters that elicited a collective ‘meh’, it’s a joy to feel once more.

Not quite magnificent but certainly Fuqua’s best since Training Day and a rare remake that actually delivers. Yee-haw!