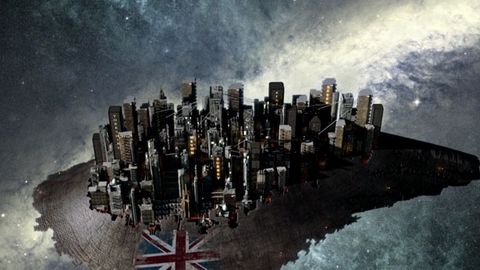 Because you demanded it: a minute-by-minute look back at Matt Smith’s second Doctor Who story

00:00 An impressive, wonderfully quirky opening FX shot - a spaceship the like of which we’ve never seen before: a rundown city in space. Note the audio clue as well – there’s no engine sound, but a creaking, like the oars of an old galley ship. Not, of course, that there should be any sound in space…

00:06 The close-up shot of the ship and so much detail to take in. Suddenly things start to make sense. Each skyscraper is a county. Love the flickering second R in Surrey, but shouldn’t Yorkshire be split into four? And admit it, wouldn’t you feel slightly miffed if you lived in a county that wasn’t namechecked? Where was BANES? Actually, who cares? Terrible name…

00:20 Blimey that school room is evocatively retro. It’s a visual cue that’s maintained through the rest of the episode, which is reminiscent of Terry Gilliam – an odd, but incredibly effective meshing of dated technology with future concepts. In fact, the whole episode is a visual delight, so unlike most SF you see on television, and is a massive part of this episode’s appeal.

00:42 A Smiler – in isolation these are creepy and memorable creations, nightmares grafted onto faded fairground charm. But by the end of the episode you’re still not sure quite why they’ve been invented… Are they a metaphor for something?

01:21 The Winder has a big clockwork key around his neck. It’s a shame we never actually see the winders doing any winding.

01:24 That clockwork sound the Smilers make as their heads turn is destined to become an iconic Who sound effect.

01:33 BLOOPER The Smiler in this shot is smiling. When we next see him he’s glowering, and the time after that he’s smiling again (before turning to his glowering face). Presumably he hasn’t been spinning in the meantime because there’s no clockwork sound effect.

01:34 The Vators are sponsored by McClintock’s Candy Burgers – sounds like it should be an-joke, but can't think what…?

02:00 The lift scene introducing the Beast Below concept being at floor zero does bring to mind previous Doctor Who stories “Paradise Towers” (1987) and “The Long Game” (2005), though the concept is dealt with from a different angle (in those stories going up was the goal to be achieved).

02:01 We see a glimpse of a map of the UK here, which, like others in the episode, shows Scotland – as we'll discover later, this is pretty generous of the cartographers. And hang on… what about the Union Flag still containing the Scottish cross?

02:51 A glorious shot of Amy floating in space just outside the TARDIS. It's a continuation of the fairy tale feel of the first episode and is utterly magical. Amy’s voiceover reinforces this feel.

04:32 “We are observers, only… that’s the one rule I’ve always stuck to in all my travels. I never get involved in the affairs of other people.” Yeah, right. And cleverly sent-up just seconds later when Amy sees the Doctor comforting a child on the viewing screen. But hang on – this is a different viewing screen to the one they were at looking the spaceship on. Do different screens do different jobs, or will they just be co-opted into the action in future willy nilly, at the behest of good camera angles?

05:48 “Life on a giant spaceship - back to basics,” - thus wonderfully explaining all the low tech

06:01 The gag with the glass of water is just wonderful. In fact, Matt Smith is brilliant throughout this whole scene.

06:11 GREAT LINE “Sorry. Checking all the water in this area. There’s an escaped fish.”

06:42 I KNOW HIM It’s the Demon Headmaster, Terrence Hardiman, not Nick Hewer from The Apprentice.

07:37 As the Doctor explains the significance of a child crying silently, we once again see the Sherlock Holmes gene in this new Doctor. It’s a great new aspect to the character and hopefully something that won’t only appear in Moffat scripts.

07:52 MYTHOLOGY “Are you a parent?” Amy asks the Doctor. He just looks slightly shifty.

09:01 GREAT LINE “What are you going to do?” “What I always do. Stay out of trouble… badly.” Love the way Matt also delivers the line, like a slightly embarrassing dad trying to act trendy.

09:57 MYTHOLOGY The contractors “digging” the hole in the road are Magpie Electricals – they’ve done well for themselves in the millennia since “The Idiot’s Lantern” (2006).

10:30 SCOTLAND They wanted their own ship. “Good for them, nothing changes,” says Amy.

11:48 The tentacle isn’t the greatest effect, and the second phallic monster in as many weeks.

12:30 SONIC SCREWDRIVER Some kind of scan

13:15 “No engine vibration.” Great explanation for the water gag.

15:34 The video presentation is a very intriguing and clever narrative device. When you finally discover what the “choice” is you realise that’s it’s all just an elaborate ruse to salve people’s consciences. The actual “crime” they’ve committed isn’t quite as odious as the lengths they’ve gone to cover it up.

17:34 Amy’s mystifying video message is shocking and really rams home there’s something major going on here – it’s also a typical Moffat device. It gives the episode a real sense of tension and gravitas.

18:40 MYTHOLOGY “Long story. There was a bad day. Bad stuff happened. You know what, I’d like to forget it all.” Sound like he’s less angsty over it all than Doctor 10.

19:25 “Only me!” Is it just us, or does she deliver this line like Harry Enfield’s Mr You-Don’t-Want-To-Do-It-Like-That?

19:31 The trash compactor scene! Is this another Star Wars reference?

19:39 SONIC SCREWDRIVER Scanning the “cave” then used as a torch for quite some while.

19:51 …And every Lancastrian watching splutters on their milk stout.

20:29 “It’s a tongue!” Another Star Wars reference? This is a bit like the space worm bit in The Empire Strikes Back .

21:05 The shot of the giant teeth is just great. Does a Star Whale generate its own atmosphere, though? There are big gaps between its gnashers.

24:22 TRIVIA “I’m the bloody Queen” is the sixth instance of swearing seen in Doctor Who , the others being in the TV movie (Grace says, “Crap!”), “The Christmas Invasion”, “Smith And Jones”, “The Fires Of Pompeii” and “The End Of Time, Part 1”. And a Slitheen almost said bollocks in “World War Three”. Eeh, this wouldn’t have happened under Hartnell.

27:01 Discovering that the Winders are part-Smilers as well is just downright disturbing. Odd that even the Queen doesn't know of the Winders’ true nature. Once again, the episode is irritatingly vague about some of its concepts. Okay, we don’t need everything handed to us on a plate, but with an idea as bizarre as the Smilers, you need to give the audience some kind of context for them. Even a hint.

28:22 It’s here the episode starts going slightly awry. Look at the timings. About 15 minutes to go and we’re already, essentially, at the climax, but there’s still tons of stuff that needs to be explained and explored, and the result is not just one infodump, but a series of infodumps, robbing the end of the episode from a real killer climax. It’s a shame because all the different elements (the nature of the beast, the riddle of the mask, the truth behind the voting, etc) are individually brilliant ideas, but by having them all explained in rapid succession each loses its dramatic room to breath. You become revelation-drunk. But who cares if the plot’s a tad similar to Star Trek: The Next Generation ’s pilot episode “Encounter At Farpoint” (the enslaved creature is actually benevolent and needs to be freed) – it’s a about million times more exciting.

29:59 The explanation about the mask proving that Liz has been alive for a very long time and wiping her memory of the truth is ingenious, but it does add to the slew of infodumping.

31:16 TRIVIA The explanation about the Star Whale. In 1983 Pat Mills and John Wagner wrote a Doctor Who script called “Space-Whale”, intended to introduce the character of Turlough. It would have seen the Doctor and co landing in the stomach of the titular creature, but was dropped for various reasons and replaced by “Mawdryn Undead” (1983). Space Whales have cropped up in sci-fi several times throughout the years.

31:30 “This one is the last of its kind.” Cue shot of Doctor looking forlorn.

32:33 You're still hoping against hope that in her video to herself, Liz 10 suddenly goes, “Oh yeah, and the Smilers… I created them because I have a clockwork fetish and hate kids…” or summat.

32:41 “I voted for this.” This whole aspect of the plot (Amy’s heartbreaking despair at what she’s done and the Doctor’s somewhat petulant anger at her for taking decisions for him) is brilliantly handled and wonderfully acted by Matt Smith and Karen Gillan.

34:09 GREAT LINE "Nobody human has anything to say to me today.”

34:50 The moment of bonding between Mandy and the tentacle could have been really cheesy, but is actually rather sweet.

35:00 Amy has one of those “think about everything” moments. Hmm, so these Sherlock moments won't be solely the Doctor’s territory. Good to see Amy learning fast, but is she becoming a bit too brilliant too quicky? Aw, who cares? It's a great little montage and rams home the fact that Mandy wearing red is no coincidence – she is supposed to remind us of young Amelia. Although, we have to agree with the Doctor – Amy does take an enormous leap of faith!

37:02 A screenwipe from one scene to the next – another Star Wars allusion, perhaps?

37:10 Amy seem to have learnt a lot about the Doctor very fast. She’s a super psychologist as well.

38:41 “Oooh, the songs they’ll write,” says the Doctor sarcastically, perhaps taking the mick out of the way Doctor 10 was always being canonised by people he saved.

38:49 GREAT LINE “Well it’s always a big day tomorrow. We’ve got a time machine. I skip the little ones.”

40:14 And we get a segue into the next episode! How cool! That hasn’t happened since the ’60s. And what a way to get people excited. That shadow of the Dalek behind Winston Churchill is just a great, great image!