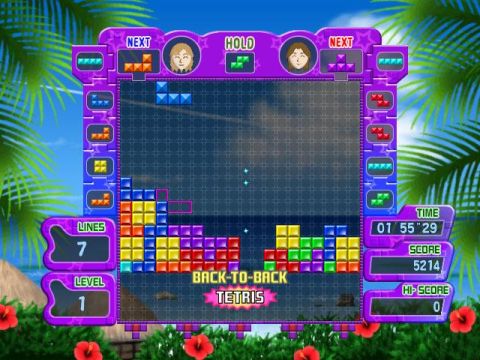 Remember Tetris Party on WiiWare from a couple of years ago? How about the fact that it was twelve bucks? Well, how would you like to pay more than double that for a barely-improved version? Me neither!

Let's be honest here. Tetris is still an incredible game. And any version of Tetris that’s released is going to sell like crazy. What's more, the WiiWare Tetris Party is one of the best versions of the classic puzzler out there. Adding all sorts of extra modes like Shadow Mode, where players use odd-shaped pieces to try and accurately match the background shape, or Stage Racer, which plays like a tunnel racer, requiring all sorts of Tetriminio maneuvering to get through tiny spaces, Party was a fantastic addition to the long-standing Tetris franchise.

So what's with the "Deluxe" tag on the end there? Well, they did add a half-dozen new game modes, including Bombliss, the chain-reaction oriented variation of the classic formula which hasn't been seen since Tetris 2 in 1993, and the very cool Co-op vs. Co-op mode, which pits two teams of two against each other in a versus mode with two huge game boards. The new Master mode will both excite and frustrate the hell out of Tetris players who fancy themselves good at the game by eliminating the dropping of the tiles, opting to just have them appear at the bottom of the stage, giving players mere moments to respond.

But despite these variations, classic Tetris calls out to be played much more strongly than any of the new variations. So why would you pay so much more for a few amusing distractions from the game that you really came to play?

Fortunately, the original Tetris game that is there is more than competent. It's not nearly as stylized as Tetris DS, but the super-simple look works for the super-simple gameplay. There's six-player online competitive play (four locally), and it runs every bit as well as it should. It can even connect with its WiiWare counterpart for their overlapping modes, which is really a nice touch. As a Tetris game, it's great, but by now that's nothing more than expected.

So is this the definitive version of Tetris for the current console generation? Sure. But is it so much better than the WiiWare release so as to warrant another, way more expensive, purchase? I'm going to say no. Get your money's worth elsewhere.