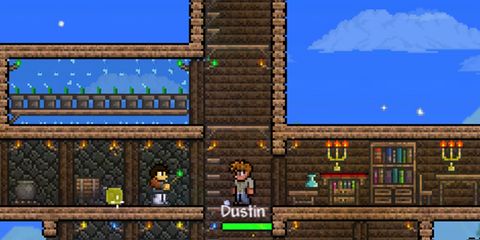 Another night, another full-on zombie and floating eyeball invasion. The safety of morning will come soon enough, and with it, some key decisions. You should probably chop down some trees for new materials. Though, maybe you might want to mine for some ore to forge better gear. Perhaps you should just suck it up and see what’s further below the surface. Then the question creeps back up: Just how big is this place?

That’s life in Terraria, a virginal wilderness playground. Untouched when it’s spawned, and in each new game it will spawn randomly, simple wandering can give way to full on spelunking expeditions. Or perhaps city-building. Or item-crafting. Or farming. It’s a vast, open game, even if played in the optional “small” world, with so much to see and do it may catch the unaware player by surprise. It's not quite a 2D platforming Skyrim, though calling it closer to Minecraft for the Castlevania crowd isn’t exactly far off.

Part of the beauty of a game like this is that there really is no direction; here’s the world and the tools to live in it, enjoy it. In the beginning (at least after the short, but worthwhile tutorial), it’s refreshingly free. But after a few hours of digging around and building houses with no real idea as to what you’re doing, the early going is a colossal drag. Some people have a taste for this kind of absolute freedom. They like to feel out crafting newer weapons and deciphering their next course of action in the world they mine down below. Terraria is definitely made for them. Players hoping for something of a straightforward affair are going to be confused and bored.

The in-game guide NPC is basically no help early on, so unless you do extensive homework with online wikis you may find yourself just mining shafts to an eventual underworld for its own sake, a difficult task which will get frustrating quick. Eventually, the world does open up a little bit, and the amount of options for doing anything that could come to mind bubbled to the surface after a little too much meandering. But Terraria’s so full of options that it’s hard to fault it for not having a good plan for your first trip through. Its genes lie in 2D platforming, with monsters that appear randomly in every nook and cranny like many old school action affairs. With the ability to construct platforms in the environment yourself, a more artistic player could logically make a completely different game out of it, which can be a ton of fun on its own.

Unfortunately, the actual platforming and fighting aren’t built particularly well, even for the faux 16-bit standards that the game is modeled on. Facing off with a group of enemies while packing some weak gear can result in an assured death in enclosed spaces, but in the open overworld, it’s easy enough to avoid threats with the floaty jumping. With time and little bit of forethought, this becomes a non-issue after you forge or find any other weapon than a standard sword and armor. The moment will eventually come where you out-muscle almost everything that you see, and then it might be back to decision time: Do you forge ahead to battle new foes, or burrow down below to mine better materials / build a better house / cultivate an arboretum? This is the game’s undeniable charm.

However, for a game that gives you so many options, actually building things ends up being irritating. Coming to consoles from PCs, the controller movement feels right in your hands, but constructing just about anything using the analog sticks is slow and tedious. Each individual piece will have to be placed carefully using the finicky right stick, and you will curse your inability to use a mouse after even a few small contracting gigs. While you'll likely get used to the inadequacies over time, the slow cycling of materials through a menu and the deliberate pace of plotting them in the environments is probably the worst trade-off Terraria had to make from PC to consoles.

But it will eventually dawn on you that you don’t have to build things. Nor do you have to kill things, craft things, or do anything you don't want to. The keys to the kingdom are given to the player right from the start, thereby making all of the rough edges greater than the sum of their parts. Once you get a good head of steam and begin to crack open the game’s idiosyncrasies, it’s tough to put down. Even better, once you really start to grasp its scope, you’ll realize that Terraria is a massive game that's made even bigger whenever the mood strikes you. It might not make a great first impression, but it’s going to be awfully hard, even this early in the year, to find a downloadable game that can offer this much content. You’ll always find more and more excuses to just keep digging away.

This was reviewed on the Xbox 360