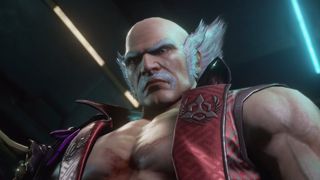 It's been half a decade since the last Tekken game came to consoles, and even longer since the last numbered sequel (we don't talk about Tekken Revolution). But now Tekken 7 is here, and reviews are praising its return as a triumph - for the most part. Our own review hails the accessible controls and roster of characters while lamenting that the series hasn't really changed much over the course of 20 years, but what does everyone else think? Let's take a look.

"It's also fair to say that Tekken 7 doesn't adequately explain the rules surrounding these new mechanics or when you should use them. Save for the briefest of tutorials in the story mode and a teaching tool in training mode that shows you how a combo should look in action, you are left to pick apart the game's rules and mechanics on your own."

"There is a certain charm to the entirely over-the-top nature of Tekken’s lore and its embracing of anime tropes, and the short character-specific chapters included in The Mishima Saga help lighten the mood while also serving up nostalgia. When King battles Jack, Jack uses its artificial intelligence to adapt to King’s fighting style, so the famous luchador uses maneuvers borrowed from his long-time friend Marduk and from his rival Armor King."

EGM on Tekken 7's abrupt end to the series' story

"The story mode sadly feels tacked on and not as emotionally important as it should be. Questions are answered and a bow is put on top of the Mishima storyline, but after several main entries of prolonged storytelling, it abruptly ends with a snap of a finger."

"Tekken’s core fighting system is as lively as ever, emphasizing ducking or dodging your opponents’ attacks instead of waiting for the right move to block. This puts a high emphasis on proper spacing, especially since moving in three dimensions can often get your opponent to whiff a move. Moving quickly around the arena requires some getting used to (be ready to dash often), and with the number of attacks any one character can perform, pinpoint button accuracy is key. This makes Tekken 7 a tough game to learn, but every victory feels immensely rewarding as a result."

"As you up the difficulty, the only way the game really gets harder is by making opponents do more damage and reducing their move pools drastically to where it’s just the strongest attack over and over. Oh, and the computer will ensure that you can’t damage your opponent during these attacks, and they seem to all break through defense. Granted, you can play on Easy if you choose, as there are no trophies or achievements tied to the difficulty, but that removes any chance of actually learning the game."